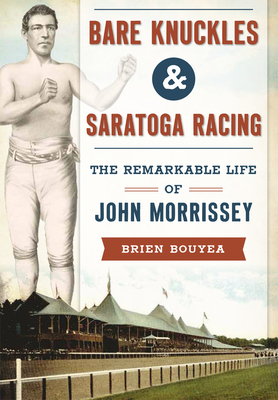 Possessing brute strength, indomitable will, and indefatigable energy, John Morrissey demolishes all comers in street gangs, the boxing ring, and politics. His signature achievement, the Saratoga Racecourse, stands today as the oldest sporting venue in the United States. — Mike Hare

John "Old Smoke" Morrissey was one of the most dynamic characters of his time. He went from a career as an undefeated bare-knuckle boxer, founded the Saratoga Race Course and eventually won elections to Congress and the New York State Senate. A poor, uneducated Irish immigrant, Morrissey became a leader in the Dead Rabbits street gang. He won fame as a fighter and fortune as the operator of a string of successful gambling houses.

Morrissey then took Saratoga Springs by storm, improbably resurrecting thoroughbred racing during the Civil War and opening his famous Club House, which was the most glamorous casino the country had ever seen. Author and National Museum of Racing Hall of Fame director of communications Brien Bouyea takes you on this fascinating journey and shows just how Morrissey did it all.