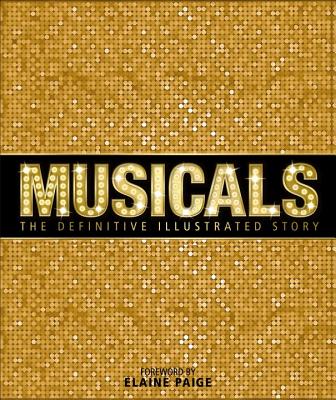 A lavishly illustrated history of a uniquely American art form. The history of the musical -- in both its theater and Hollywood incarnations-- is traced from humble vaudeville origins to its major prominence today. This elegant book includes capsule biographies and interviews with some of the people whose names have become synonymous with the word musical. — Alden Graves

Musicals: The Definitive Illustrated Story showcases the complete history of the musical on stage and screen, from its origins in ancient Greece to early twentieth century dance halls and vaudeville to the golden age of cinema productions to the record-breaking Broadway musicals of today.

Packed with historical insights, memorabilia, behind-the-scenes gossip, and artifacts, Musicals: The Definitive Illustrated Story takes you on the ultimate behind-the-scenes tour of the best-loved musicals, such as Chicago, Les Misérables, The Lion King, The Phantom of the Opera, The Sound of Music, and many more.

In all, Musicals: The Definitive Illustrated Story features more than 140 notable stage and film productions and the stories of the people who created them. Throughout, clear infographics, rich black-and-white and color photography, and a clever, informative design make this comprehensive overview of musical theater and movie musicals a true showstopper.

"Musicals is sure to be a toe-tapping hit for fans of the footlights." — Shelf Awareness (Starred Review)

"A visual feast for theater fans and an incredible compendium of musical history and development." — Library Journal (Starred Review)

"This lavishly illustrated coffee table book…is a great reference for theater-lovers who want to know more about their favorite shows." — The Buffalo News

"The photos are wonderful and will bring back lots of great memories." — Dayton Daily News

"Fans can never get enough." — Booklist