Camelot's End: Kennedy vs. Carter and the Fight that Broke the Democratic Party (Hardcover) 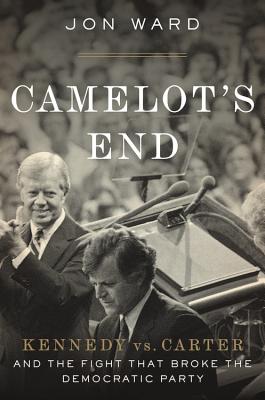 From a strange, dark chapter in American political history comes the captivating story of Ted Kennedy's 1980 campaign for president against the incumbent Jimmy Carter, told in full for the first time.
The Carter presidency was on life support. The Democrats, desperate to keep power and yearning to resurrect former glory, turned to Kennedy. And so, 1980 became a civil war. It was the last time an American president received a serious reelection challenge from inside his own party, the last contested convention, and the last all-out floor fight, where political combatants fought in real time to decide who would be the nominee. It was the last gasp of an outdated system, an insider's game that old Kennedy hands thought they had mastered, and the year that marked the unraveling of the Democratic Party as America had known it.

Camelot's End details the incredible drama of Kennedy's challenge -- what led to it, how it unfolded, and its lasting effects -- with cinematic sweep. It is a story about what happened to the Democratic Party when the country's long string of successes, luck, and global dominance following World War II ran its course, and how, on a quest to recapture the magic of JFK, Democrats plunged themselves into an intra-party civil war.
And, at its heart, Camelot's End is the tale of two extraordinary and deeply flawed men: Teddy Kennedy, one of the nation's greatest lawmakers, a man of flaws and of great character; and Jimmy Carter, a politically tenacious but frequently underestimated trailblazer. Comprehensive and nuanced, featuring new interviews with major party leaders and behind-the-scenes revelations from the time, Camelot's End presents both Kennedy and Carter in a new light, and takes readers deep inside a dark chapter in American political history.

Jon Ward is the senior political correspondent for Yahoo News, author of Camelot's End: Kennedy vs. Carter and the Fight that Broke the Democratic Party (Twelve Books, 2019), and host of The Long Game podcast. He has covered American politics and culture for two decades as a city desk reporter in Washington D.C.; as a White House correspondent who traveled aboard Air Force One to Africa, Europe, and the Middle East; and as a national affairs correspondent who has traveled the country to write about two presidential campaigns and the ideas and people animating our times. He has been published in The Washington Post, The New Republic, PoliticoMagazine, Vanity Fair, The Huffington Post, and The Washington Times. He and his family live in Washington, D.C.

"Jon Ward captures the sound and the fury of [the 1980 Democratic Primary] struggle in Camelot's End, a fast-paced, even-handed look at Kennedy's doomed challenge to a doomed president...Ward's achievement is in showing -- better than any of his predecessors -- how the two circled each other warily before their public confrontation during the presidential campaign."—The Washington Post

"A masterful account of an all but forgotten episode in modern American politics: the epic clash between Jimmy Carter and Ted Kennedy for the 1980 Democratic nomination. An accomplished journalist, Ward brilliantly recreates an era when, in the aftermath of Watergate and the country's defeat in Vietnam, American power and prestige were waning and the country's faith in its institutions was being sorely tested. Against this backdrop, his portrait of his two protagonists who fought for the soul of their party is sharp and insightful, capturing both the strengths and glaring flaws of both men. CAMELOT'S END is a must-read for anybody interested in American politics."—Michael Isikoff, #1 New York Times bestselling author of Russian Roulette: The Inside Story of Putin's War on America and the Election of Donald Trump

"Well written, well reported, and compelling, Jon Ward's CAMELOT'S END paints a picture of two flawed and ambitious politicians and destiny's collision course for them. Beyond the political stakes seen by the Kennedy and Carter camps, Ward manages to draw out the drama of the philosophical choices the two represented, and the character of the Democratic Party and indeed the nation. It's a sheer joy to read."—Jake Tapper, CNN anchor and chief Washington correspondent

"Anyone who wants to understand how our presidential campaigns came to be the way they are needs to read this rollicking, surprising account of an election season whose twists and turns have never, until now, been fully understood by anyone other than the participants. And there's a reason most of them didn't want the rest of us to find out."—Sasha Issenberg, bestselling author of The Victory Lab

"CAMELOT'S END moves through an important time of testing with power and pace. The profiles drawn are sharp and memorable. This passion for politics is woven into our history and skillfully retold here."—Major Garrett, chief White House correspondent CBS News

"In CAMELOT'S END, Jon Ward skillfully resurrects the poisonous 1980 conflict between Jimmy Carter and Ted Kennedy that sowed new divisions in the Democratic Party and left it in a political wilderness for the next twelve years."—Curtis Wilkie, author of The Fall of the House of Zeus

"CAMELOT'S END is a fabulous work of history that explores the titanic political battle in 1980 between President Jimmy Carter and Sen. Ted Kennedy. In novelistic fashion and with a keen eye for detail, Jon Ward plumbs the human drama behind a fight that tore apart the Democratic Party -- a high-stakes confrontation that reverberates to this day."—Del Wilber, New York Times bestselling author of A Good Month for Murder

"The story of two political titans whose clash defined the modern Democratic Party, expertly told by one of the best political reporters around. Jon Ward brings his tragic heroes to life on every page, rendering Carter and Kennedy with all the human complexity they deserve. It's a fresh breeze of a book."—Matt Bai, author of All the Truth Is Out

"Ward's vivid telling of what may be the last missing chapter in the saga of the Kennedy family is compellingly told...CAMELOT'S END is a first-rate work."—Craig Shirley, New York Times bestselling author of December 1941

"A well-researched and valuable look back at a period of intense political turmoil that helped shape our current environment."—Booklist

"[A] thorough and readable chronicle of how the bitter primary fight between Carter and Ted Kennedy and the Democrats' misplaced nostalgia for the past sabotaged their future."—The Boston Globe

"Captivating...[CAMELOT'S END] moves at a steady clip, but not by sacrificing scholarship -- Ward draws on journalism of the day, previous biographies, histories, memoirs, and new interviews with some of the players. He engages fully with the complexities of both men...enthralling reading."—Publishers Weekly (Starred Review)

"Ward's account of the tussle with Camelot scion Ted Kennedy, one that forced Carter to submit to the indignity of fighting for his party's nomination for a second term, recovers the animal spirits that fueled [Carter's] rise from arrant obscurity. CAMELOT'S END narrates a rich drama."—The Irish Times