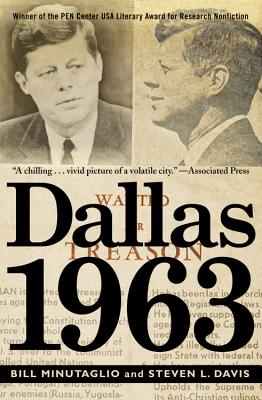 In the months and weeks before the fateful November 22nd, 1963, Dallas was brewing with political passions, a city crammed with larger-than-life characters dead-set against the Kennedy presidency. These included rabid warriors like defrocked military general Edwin A. Walker; the world's richest oil baron, H. L. Hunt; the leader of the largest Baptist congregation in the world, W.A. Criswell; and the media mogul Ted Dealey, who raucously confronted JFK and whose family name adorns the plaza where the president was murdered. On the same stage was a compelling cast of marauding gangsters, swashbuckling politicos, unsung civil rights heroes, and a stylish millionaire anxious to save his doomed city.

Bill Minutaglio and Steven L. Davis ingeniously explore the swirling forces that led many people to warn President Kennedy to avoid Dallas on his fateful trip to Texas. Breathtakingly paced, Dallas 1963 presents a clear, cinematic, and revelatory look at the shocking tragedy that transformed America. Countless authors have attempted to explain the assassination, but no one has ever bothered to explain Dallas-until now.

With spellbinding storytelling, Minutaglio and Davis lead us through intimate glimpses of the Kennedy family and the machinations of the Kennedy White House, to the obsessed men in Dallas who concocted the climate of hatred that led many to blame the city for the president's death. Here at long last is an accurate understanding of what happened in the weeks and months leading to John F. Kennedy's assassination. Dallas 1963 is not only a fresh look at a momentous national tragedy but a sobering reminder of how radical, polarizing ideologies can poison a city-and a nation.

Bill Minutaglio is the author of several books, including Dallas 1963, for which he won the PEN Center USA Literary Award for Research Nonfiction with Steven L. Davis. His work has appeared in the New York Times, Washington Post, Newsweek, and Esquire.

Steven L. Davis is the PEN USA-award winning author of four books focusing on iconoclasts, including Dallas 1963 with Bill Minutaglio and J. Frank Dobie: A Liberated Mind. He is the president of the Texas Institute of Letters and a curator at the Wittliff Collections at Texas State University in San Marcos.

"Bill Minutaglio and Steven L. Davis's DALLAS 1963 is a brilliantly written, haunting eulogy to John F. Kennedy. By exposing the hatred aimed at our 35th president, the authors demonstrates that America--not just Lee Harvey Oswald--was ultimately responsible for his death. Every page is an eye opener. Highly recommended!"—Douglas Brinkley, professor of history at Rice University and author of Cronkite

"All the great personalities of Dallas during the assassination come alive in this superb rendering of a city on a roller coaster into disaster. History has been waiting fifty years for this book."—Lawrence Wright, author of The Looming Tower and Going Clear

"Minutaglio and Davis capture in fascinating detail the creepiness that shamed Dallas in 1963."—Gary Cartwright, author and contributing editor at Texas Monthly

"In this harrowing, masterfully-paced depiction of a disaster waiting to happen, Minutaglio and Davis examine a prominent American city in its now-infamous moment of temporary insanity. Because those days of partisan derangement look all too familiar today, DALLAS 1963 isn't just a gripping narrative-it's also a somber cautionary tale."—Robert Draper, contributor, New York Times Magazine and author of Do Not Ask What Good We Do: Inside the U.S. House of Representatives

"The authors skillfully marry a narrative of the lead-up to the fateful day with portrayals of the Dixiecrats, homophobes, John Birchers, hate-radio spielers, and the 'superpatriots' who were symptomatic of the paranoid tendency in American politics."—Harold Evans, author of The American Century

"After fifty years, it's a challenge to fashion a new lens with which to view the tragic events of November 22, 1963--yet Texans [Minutaglio and Davis] pull it off brilliantly."—Publishers Weekly (starred review)

"A thoughtful look at the political and social environment that existed in Dallas at the time of the president's election... a climate, the authors persuasively argue, of unprecedented turmoil and hatred."—Booklist