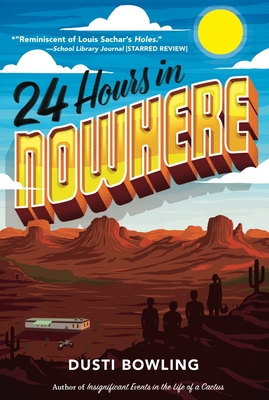 By Dusti Bowling
$7.95
Click Title for IN STOCK Location

The meanest kid in Nowhere, Arizona steals Gus's friend's motorbike and won't give it back unless Gus brings him a piece of gold from Dead Frenchman's Mine. After all, it's common knowledge that there's treasure hidden there. The only problem? Every person who has gone into the mine to search for it has died trying. Armed with nothing but a couple of bologna sandwiches, Gus and his motley crew of friends must survive a cave-in, a gunshot wound, and an underground lake full of creepy skeletons and somehow even creepier shrimp on their quest to find gold. I loved this survival-story-meets-mystery so much that I immediately devoured all of Bowling's other books. This one is the best of the bunch! Great for fans of Louis Sachar and Leslie Connor. — Nadja Tiktinsky

"Reminiscent of Louis Sachar's Holes with its quirky characters and unique desert setting, this is a middle-grade read that will easily transport readers somewhere special." --School Library Journal (Starred review) When you come from Nowhere, can you ever really make it anywhere? Author Dusti Bowling returns to the desert to create another gripping story about friendship, hope, and finding the power we all have within ourselves. Now available in paperback Welcome to Nowhere, Arizona, the least livable town in the United States. For Gus, a bright 13-year-old with dreams of getting out and going to college, life there is made even worse by Bo Taylor, Nowhere's biggest, baddest bully. When Bo tries to force Gus to eat a dangerously spiny cactus, Rossi Scott, one of the best racers in Nowhere, comes to his rescue--but in return she has to give Bo her prized dirt bike. Determined to buy it back, Gus agrees to go searching for gold in Dead Frenchman Mine, joined by his old friend Jessie, Rossi, and even Bo's sidekick, Matthew. As they race against the clock hunting for treasure, narrowly surviving everything from cave-ins to mountain lions, they bond over shared stories of how hard life in Nowhere is--and they realize this adventure just may be their way out.