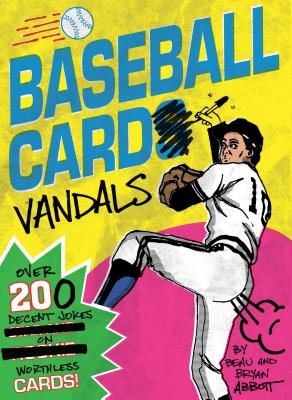 I absolutely love this book. A collection of the best of the worst from the popular Instagram account of the same name. After all our childhood baseball cards ended up worthless, what better to do with them than to draw farts and boogers on the unsuspecting ballplayers?!

From the creative duo Mashable called "the Rembrandt and Picasso of vandalized baseball cards."

A home run book that combines oddball humor with nostalgic collectibles: Every day since 2012, brothers Beau and Bryan Abbott have drawn crude jokes on their old trading cards from the ''80s and ''90s and posted them on Tumblr, Twitter, and Instagram as Baseball Card Vandals. Now the fruits of this completely unnecessary labor have been collected in this stunningly absurd book of the same name.Baseball Card Vandals will be a home run with sports fans, art lovers, memorabilia collectors, pop culture watchers, Internet geeks, comedy connoisseurs, and permanent marker sniffers everywhere.

Smart, clever and funny book featuring 200 baseball cards that have been extraordinarily and cleverly defaced.

Beau Abbott is a copywriter and Bryan Abbott is an art director. They both live in Culver City, California.

"Two Culver City-based guys calling themselves 'artistically-inclined weirdos' have created a following ... so a book spinoff is kind of natural. They didn't throw away their old common cards as kids, but instead experimented on them through the fumes of Sharpies, Wite-Out and glue sticks with name and word play. It belongs shelved in the humor section of book stores, snickering across the aisle at the stodgy baseball hardbounds."
Los Angeles Times

"the book is a solid and spit-take worthy collection that wondrously yields comedy gold even after numerous flip-throughs while exhibiting the kind of distorted wit which would win you both friends and enemies in the schoolyard."
-The Hundreds

"This is the scariest book I've ever read. Bo Jackson? Not in mint. Oscar Gamble? Good luck getting the Beckett-suggested minimum price for that. And the Ken Griffey Jr. card? THE Ken Griffey Jr. card? Don't read this book if you're faint of heart. But for the few, the brave, the kids who weren't above busting out a ballpoint pen when they noticed they'd somehow managed to get eleven Alan Bannister Topps cards...Beau and Bryan Abbott have you covered."
-Andrew Farago, Cartoon Art Museum Curator