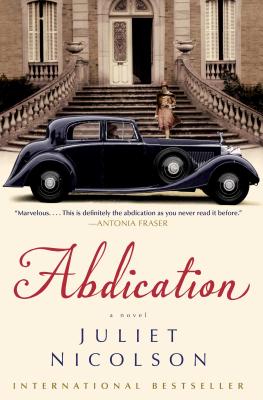 By Juliet Nicolson
$15.00
Hard to Find - May no longer be available

Splendid historical fiction written by a great historian. Although the story of Wallis Simpson and King Edward VIII is a familiar one, the reader is treated to a different perspective on the tale and the times. The story is told from the point of view of different characters, while darting into little known alleys of London life during this fascinating period. — Karen Frank

A beloved king is dead, and by year’s end, the charismatic new monarch will give up his throne for love. The world is on the brink of war. And in the tumultuous intervening months, three outsiders will find themselves embroiled in the hidden truths, undeclared loves, unspoken sympathies, and covert complicities of a glittering high society in the throes of upheaval.

After a long journey from her home in Barbados, May Thomas secures a position as a secretary and driver and opens her heart to a man seemingly beyond her reach. Outwardly affable American spinster Evangeline Nettlefold finds her place in the uppermost social circles, but her growing resentment toward her childhood friend Wallis Simpson predicts disaster. A friendship catapults Julian Richardson from his mother’s middle-class parlor to luxurious dinners with the king, yet he cannot forget those who struggle outside the gilded gates, nor his uneasy affection for May.

As addictive as Downton Abbey, as poignant as The Remains of the Day, renowned historian Juliet Nicolson’s debut novel is a breathtaking story inspired by a love affair that shook the world at a time when order and chaos battled for supremacy.

Juliet Nicolson is the author of The Perfect Summer: England 1911, Just Before the Storm and The Great Silence: Britain From the Shadow of the First World War to the Dawn of the Jazz Age. She has two daughters and lives with her husband in Sussex, England.

“I was completely gripped by the story of David and Wallis Simpson.... But no less compellingly drawn were the rest of Juliet Nicolson's cast of characters. The kindly Evangeline, driven to pathetic jealousy. The almost-but-thank-goodness-not-quite caddishness and earnestness of Julian (just a perfect rendition of a man of that era), the sweet but fiery May, the love and fear felt by Florence and the genial Philip.... Goodness, Abdication really is good. I'm in awe of Juliet's ability to move from nonfiction to fiction so seamlessly.”
— Jessica Fellowes, New York Times bestselling author of The World of Downton Abbey

“I can heartily recommend Abdication by Juliet Nicolson. [It] is a new take on the events of 1936, because it introduces a marvellous fictional character, in the shape of Wallis Simpson’s American school friend Evangeline Nettlefold, the antithesis of the future Duchess in character – and physical shape; then there is May Thomas, the 19-year-old girl chauffeur… This is definitely the abdication as you never read it before, and difficult to put down on the beach.”
— Antonia Fraser in The Telegraph (London)

“Anyone interested in the 1930s will revel in this richly detailed slant on the abdication crisis.”
— Daisy Goodwin, New York Times bestselling author of The American Heiress

“A vivid reimagining of the crisis surrounding King Edward VIII's abdication through the eyes of two intriguing outsiders from very different worlds. In her thoroughly absorbing novel, Juliet Nicolson combines a historian's deep knowledge and eye for telling detail with a keen sense of drama, a dash of romance, and an understanding of the complex motivations of human nature.”
— Sally Bedell Smith, New York Times bestselling author of Elizabeth the Queen

“In historian Nicolson's first fiction, a Remains of the Day ambience is played out against the backdrop of George V's death and Edward VIII's ascension to the throne.... Nicolson writes knowledgeably of weekends in the country, swank parties and the ironic-supercilious posture of the British upper class. The novel rings with authenticity... a period drama ready to be adapted by the BBC and rerun on PBS.”

“Absorbing.... As the abdication crisis deepens and Britain is thrust ever closer to the perils of war, the lives of Nicolson's characters undergo significant changes, all rendered by her keen comprehension of human nature. And her imaginative prose adds to the pleasure.”

“Abdication beautifully evokes the troubled thirties, with its high-stakes politics, easy money, and social tensions. Juliet Nicolson is an outstanding historian who brings the full panoply of her talent and research to the task of recreating the abdication crisis and its effect on Britain. This is a wonderful novel.”
— Amanda Foreman, award-winning and internationally bestselling author of Georgiana, Duchess of Devonshire and A World on Fire: Britain’s Crucial Role in America’s Civil War
“With her keen eye for historical detail and intimate knowledge of England’s social mores, Juliet Nicolson weaves a juicy and evocative tale of lives caught in the midst of one of Britain’s great modern dramas, the abdication of King Edward VIII.”
— Tina Brown

“Fans of The King’s Speech will love Nicolson’s racy historical drama, set in 1936 against the backdrop of Wallis Simpson and Edward VIII’s love affair.”

“Anyone requiring a post— Downton Abbey fix could do worse than this beguiling, Thirties-era, class-conscious soap opera, written by the granddaughter of Harold Nicolson and Vita Sackville-West. Enthusiastically recommended.”

“Nicolson's eye for period detail is spot-on, and her characterisations of the main players are superb.... This is a delightful story of a friendship forged by the drama of the Abdication and the approaching war; ideal for the intelligent deckchair.”

“...[an] imaginative and warmly woven first novel.... In every nuance of Abdication, Nicolson’s subtle layering of relationships attests to her innate facility in capturing even the smallest details of class-regimented British society during its last dance of self-indulgence before the cataclysm of World War II.”

“Richly detailed and set in a dynamic time and place.”