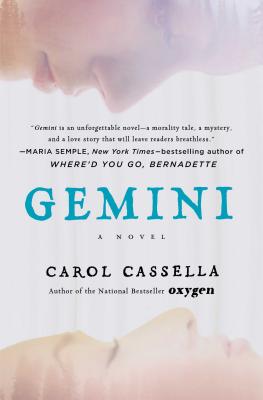 By Carol Cassella
$22.99
IN WAREHOUSE - Usually Ships in 1-5 Business Days

When a Jane Doe arrives in Dr. Charlotte Reese's ICU, she becomes determined to not only save her life but also piece together who this woman is. Why is no one looking for her? What happens if she never regains consciousness? And what does Charlotte's boyfriend have to do with it all? Great book club read! — Jess Elder

When an unidentified and unconscious accident victim is admitted to Dr. Charlotte Reese’s ICU unit, Charlotte has no idea how entwined their lives will become.
This medical drama sucked me in from its beginning. — Gail King

"Gemini is an unforgettable novel--a morality tale, a mystery, and a love story that will leave readers breathless" (Maria Semple, New York Times bestselling author of Where'd You Go, Bernadette). As should be the case with any memorable love story, the first time Raney Remington saw Bo she hated him. When the skinny kid from the city first arrives in her Pacific Northwest hometown, Raney doesn't quite know what to make of him. Yet her intense dislike of the know-it-all bookworm softens as Bo latches on to Raney, eager to learn about the Washington island he's been sent for the summer. Decades later Dr. Charlotte Reese finds herself fighting to keep an unconscious ICU patient stable while also unwrapping the mystery of the unconscious woman, the victim of a hit-and-run. Consumed by questions about the woman's identity, Charlotte enlists Eric, her journalist boyfriend, to investigate. Their search for answers brings them to heartrending truths about Jane Doe―and themselves. In beautiful interwoven storytelling, master of medical drama Carol Cassella presents two women--lifetimes apart--who face the inescapable forces shaping their lives. Filled with stunning medical detail and set against the breathtaking backdrop of the Pacific Northwest, Gemini is a vivid novel of moral complexity and emotional depth that "is just what the doctor ordered" (People).