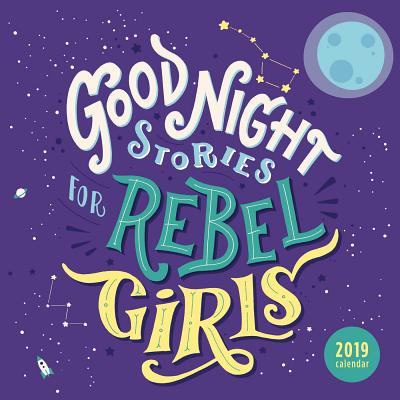 By Elena Favilli, Francesca Cavallo
Call or email to see if a used copy is available.
Out of Print

The Good Night Stories for Rebel Girls 2019 Wall Calendar features stunning portraits of thirteen incredible women who have helped change the world. Illustrated by female artists from around the globe, the calendar captures the individual spirits of authors, scientists, activists, artists, athletes, and other heroic women—both past and present—who have pushed boundaries to expand options and move the world toward a place without limitations based on gender, race, or anything else that sets someone apart.

The calendar is based on the self-published book project Good Night Stories for Rebel Girls that Elena Favilli and Francesca Cavallo of Timbuktu Labs launched on Kickstarter after being told by traditional investors their idea was “nice but too small.” The project raised more than $1 million on Kickstarter, set the crowd-funding record for most-funded original book, and became a New York Times best seller.

ELENA FAVILLI is an NYT bestselling author, journalist, and breaker of glass ceilings. Elena is the founder and CCO of Rebel Girls, a media company dedicated to inspiring the next generation of brave and confident girls. In 2016, she co-wrote and published the most crowdfunded literary project in history, Good Night Stories for Rebel Girls, now translated into nearly 50 languages. She has written for the Guardian, Vogue, COLORS magazine, McSweeney's, RAI, Il Post, and La Repubblica. She lives in Los Angeles with her dog Lafayette, a Bracco Italiano.

Francesca Cavallo is an Italian author living in Los Angeles.

She is the bestselling author of the "Good Night Stories for Rebel Girls" book series. Her books sold more than 4 million copies and have been translated into 50 languages. Francesca launched the two most successful crowdfunding campaigns in the history of publishing and has created the #RebelGirls movement in 2016.