The Boy in the Woods: A True Story of Survival During the Second World War (Paperback) 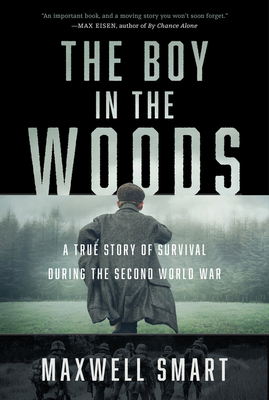 Maxwell Smart was eleven years old when his entire family was killed before his eyes. He might have died along with them, but his mother selflessly ordered him to save himself. Alone in the forest, he dug a hole in the ground for shelter and foraged for food in farmers’ fields. His clothes in rags and close to starvation, he repeatedly escaped death at the hands of Nazis.

After months alone, Maxwell encountered a boy wandering in the forest looking for food. Janek was also alone; like Maxwell he had just become an orphan, and the two quickly became friends. They built a bunker in the ground to survive through the winter. One day, after a massacre took place nearby, the boys discovered a baby girl, still alive, lying in the arms of her dead mother. Maxwell and Janek rescued the baby, but this act came at a great cost.

Max’s epic tale of heroism will inspire with its proof of the enduring human spirit. From the brutality of war emerges a man who would become a celebrated artist, offering the world, in contrast to the horrors of his suffering, beautiful works of art. The Boy in the Woods is a remarkable historical document about a time that should never be forgotten.

MAXWELL SMART was born Oziac Fromm in 1930 in Prague, Czechoslovakia. At age eleven, he was left alone and homeless in war-torn Europe when his family was killed. A father and grandfather, he lives in Montreal with his wife, Tina. Maxwell Smart is still painting at ninety-one.

"The Boy in the Woods is one of those bestsellers that appears seemingly out of nowhere. It is a gripping Holocaust survival memoir." — Toronto Star

"It’s hard for me to find the words to capture the emotional experience of reading [Smart's] story. [His] resilience is astonishing, and I was frequently moved to tears. . . . Yet there are equally moments of profound joy in his story, including some moving and unexpected reunions which came later in his life." — Canadian Jewish News

“[A] remarkable tale. . . . The intensity of the young boy’s life and his ability to create a new one, keeping the family name alive as his mother wished, make for a strong personal memoir, and a memorial to the millions of victims.” — Winnipeg Free Press

"[A] remarkable story of resilience and survival." — Global News

"Maxwell Smart lived under inhuman conditions, with the loss of his parents and extended family and the loss of freedom. He faced enormous danger and threats to his life and was determined to survive. In an atmosphere of genocide he had the smarts and willpower to simply continue to exist. After the end of the war he picked up the pieces and was successful in rebuilding his life. His love for his family and his art gave him peace and fulfillment. The Boy in the Woods is an important book, and a moving story you won’t soon forget." — Max Eisen, author of By Chance Alone: A Remarkable True Story of Courage and Survival at Auschwitz, Winner of CBC Canada Reads and Finalist for the RBC Taylor Prize

"Maxwell Smart’s experience of survival and sacrifice inspired almost unimaginable acts of ingenuity, courage and pathos. But his story is also, perhaps above all, one of innocence lost. Smart bears the permanent psychological scars of his formative years, forged in the crucible of unchecked hatred and cruelty. The Boy in the Woods is a timely reminder, as the Holocaust recedes from living memory, of what is at stake when the veneer of Western civilization gives way to barbarism. It is a moving but also an extremely accessible memoir—even for younger readers. I recommend it highly."  — Robert Wright, Vanier Professor, Trent University, and author of the bestselling Our Man in Tehran: Ken Taylor, the CIA, and the Iran Hostage Crisis