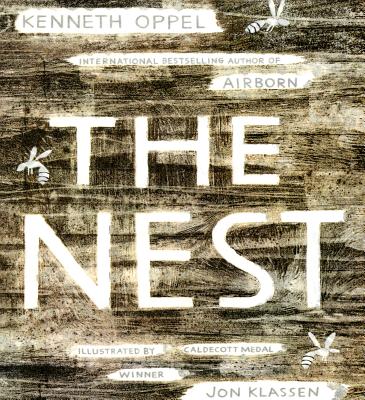 By Kenneth Oppel, Gibson Frazier (Read by)
$14.99
Hard to Find - May no longer be available

Best described as "creepy", Oppel's new novel reads like a fever dream (for kids). In The Nest, a young boy strikes a bargain with a swarm of wasps who promise to make the health problems of his baby brother go away. Yet what seems to be a good idea at first turns out to be quite the opposite. Eerie appearances by a "working" toy telephone, a bizarre neighborhood knife salesman, and many dream-dialogues with a queen bee anchor this very gripping novel. Ideal for kids (8-13) looking for a thriller! — Aubrey Restifo

If Neil Gaiman's Coraline and David Almond's Skellig had a baby, it would be in this nest. This is possibly the most frightening gothic tale I've read in many a year - a creeptastic modern twist on the classic fairy-changeling legend. Steven's baby brother was born with multiple medical problems, an ongoing crisis which has their parents frantic and distracted. Their distraction leaves Steven emotionally abandoned, and he must struggle alone to suppress his mounting anxiety with breathing techniques, compulsive rituals, and wishful thinking. When offered a chance to "fix" the baby, Steven agrees, only to learn that the bargain he has made comes at a terrible price. For upper elementary readers who like a good pulse-pounding scare. — Jennifer Armstrong

“The Nest leaves a lasting mark on the memory.” —The New York Times Book Review

Steve just wants to save his baby brother—but what will he lose in the bargain? Kenneth Oppel’s (Silverwing, The Boundless) haunting gothic tale for fans of Coraline, is one of the most acclaimed books of the year, receiving six starred reviews. Illustrations from Caldecott Medalist Jon Klassen.

For some kids summer is a sun-soaked season of fun. But for Steve, it’s just another season of worries. Worries about his sick newborn baby brother who is fighting to survive, worries about his parents who are struggling to cope, even worries about the wasp’s nest looming ominously from the eaves. So when a mysterious wasp queen invades his dreams, offering to “fix” the baby, Steve thinks his prayers have been answered.

All he has to do is say “Yes.” But “yes” is a powerful word. It is also a dangerous one. And once it is uttered, can it be taken back?

Celebrated author Kenneth Oppel creates an eerie masterpiece in this compelling story that explores disability and diversity, fears and dreams, and what ultimately makes a family. Includes illustrations from celebrated artist Jon Klassen.