Quantum Cosmology: A Fundamental Description of the Universe (Lecture Notes in Physics #835) (Hardcover) 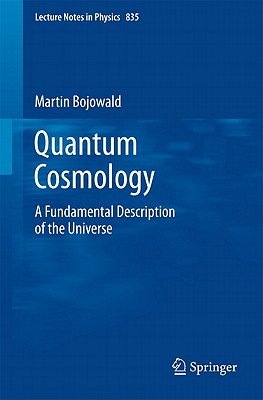 Consequences of quantum gravity on grander scales are expected to be enormous: only such a theory can show how black holes really behave and where our universe came from. Applications of loop quantum gravity to cosmology have especially by now shed much light on cosmic evolution of a universe in a fundamental, microscopic description. Modern techniques are explained in this book which demonstrate how the universe could have come from a non-singular phase before the big bang, how equations for the evolution of structure can be derived, but also what fundamental limitations remain to our knowledge of the universe before the big bang.

The following topics will be covered in this book:

Hamiltonian cosmology: a general basic treatment of isotropy, perturbations and their role for observations; useful in general cosmology.
Effective equations: an efficient way to evaluate equations of quantum gravity, which is also useful in other areas of physics where quantum theory is involved.
Loop quantization: a new formalism for the atomic picture of space-time; usually presented at a sophisticated mathematical level, but evaluated here from an intuitive physical side.

The book will start with physical motivations, rather than mathematical developments which is more common in other expositions of this field. All the required mathematical methods will be presented, but will not distract the reader from seeing the underlying physics. Simple but representative models will be presented first to show the basic features, which are then used to work upwards to a general description of quantum gravity and its applications in cosmology. This will make the book accessible to a more general physics readership.

Professor Martin Bojowald works on quantum gravity and has initiated loop quantum gravity, which is the main approach to quantum cosmology and the subject of this book. For his work, he has received the First Prize of the Gravity Research Foundation Essay Competition in 2003, the Xanthopoulos Prize of the International Society on General Relativity and Gravitation in 2007, and an NSF Early Career Award in 2008. He has also written several pieces for a general audience on the subject.