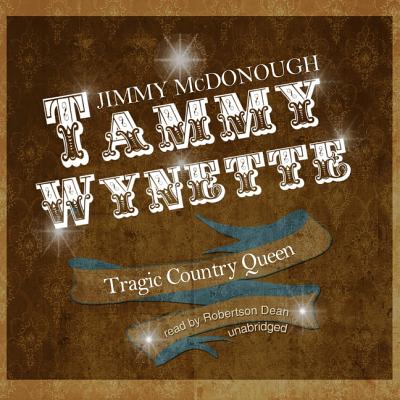 One of the 20th century's most influential country singers led a life that cast the trials and heartbreaks that she often sang about into shame. Wynette was always driven to seek stardom, but her eventual success came at a terrible price. Mr. McDonough is obviously a fan of the lady, although that does not mean that he shies away from the less savory aspects of her determined rise to the top. The book also provides him with the opportunity to give due credit to a singularly talented woman, who, no doubt, would still argue that it was all worth it. Every single teardrop. — Alden Graves

Tammy Wynette was one of the great female singers of the twentieth century, an artist who could plumb the darkest corners of her heart and transform private grief into public drama. Bestselling biographer Jimmy McDonough tells the story of the small-town girl who grew up to be the woman behind the microphone and whose meteoric rise led to a decades-long career full of tragedy and triumph. Through a high-profile marriage and divorce, her dreadful battle with addiction and illness, and the struggle to compete in a rapidly evolving Nashville, Tammy Wynette turned a brave smile toward the world and churned out masterful hit songs full of vulnerability, disillusionment, strength, and endurance. This is an intimate portrait of a music icon, the Queen of Heartbreak, whose powerful voice evoked universal pain and longing even as it belied her own.