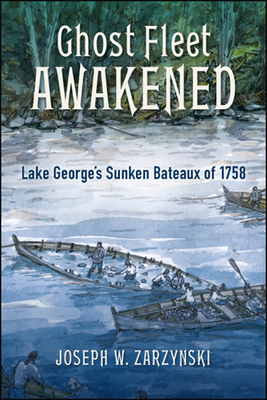 By Joseph W. Zarzynski
$24.95
Click Title for IN STOCK Location

In Ghost Fleet Awakened, Joseph W. Zarzynski reveals the untold story of a little-recognized sunken fleet of British warships, bateaux, from the French and Indian War (1755-1763). The story begins more than 250 years ago, when bateaux first plied the waters of Lake George, New York. Zarzynski enlightens readers with a history of these utilitarian vessels, considered the most important vessels that transported armies during eighteenth-century wars in North America, and includes their origins and uses. By infusing the book with underwater archaeology doctrine, Zarzynski shows the nautical significance of these colonial craft. In the autumn of 1758, the British command at Lake George made a daring decision to deliberately sink two floating batteries (radeaux), some row galleys and whaleboats, a sloop, and 260 bateaux, thereby placing the warships into wet storage and protecting them from marauding French during the coming winter. In 1759, many submerged boats were raised but some were not. Then, in 1960, two divers rediscovered several sunken bateaux, dubbed the "Ghost Fleet." These shipwrecks were the focus of underwater archaeological investigations that provided archaeologists with opportunities to gain unprecedented insight into eighteenth-century lifeways. Zarzynski explores and explains shipwreck preservation techniques, the creation of shipwreck parks for scuba enthusiasts, and the many multifaceted programs developed by the nonprofit organization Bateaux Below to help protect these finite cultural treasures.

Joseph W. Zarzynski is a maritime archaeologist, registered professional archaeologist, and award-winning documentarian. He is the coauthor (with Peter J. Pepe) of Documentary Filmmaking for Archaeologists and (with Bob Benway) Lake George Shipwrecks and Sunken History, and the author of Champ: Beyond the Legend and Monster Wrecks of Loch Ness and Lake Champlain. He lives in upstate New York.