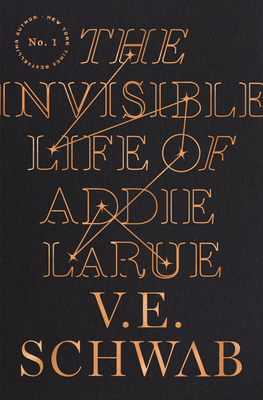 On the eve of a marriage Adeline does not want, she cries out to the darkness for a different life, and makes an unbreakable deal with the being that lives in its shadows. The bargain requires her to live forever, but also to be forgotten by anyone she meets or has ever known. Condemned to a long, lonely life she wants to give in many times, until one day she hears the words she has longed for “I remember you, Addie LaRue”. This is a stunning novel that you will not be able to put down, and a world you will not want to leave, or forget so easily.

When Addie makes a bargain to live forever, she does not expect to be forgotten by everyone she meets. Forced to live a lonely life, Addie attempts to leave her mark on a world that does not even know she exists. That is until she walks into a bookstore and hears three simple words, "I remember you." The Invisible Life of Addie LaRue is a profound novel, one that will leave you at a loss for words, but I promise you, Addie will live in your thoughts long after you turn the final page.

#IRememberAddie & I am very sad after reading this beautiful book.
In 1714, Addie LaRue pleaded to the shadows of the woods for a life of freedom. The darkness complied, and they struck a deal; she would remain young and healthy forever, but the cost was that no one would ever remember her. For three hundred years, Addie goes about the world alone and forgotten, desperate to leave a mark but determined to not give herself up to the darkness, until one day she meets Henry, a bookstore worker, and he says the words she has yearned to hear: “I Remember You.”
Fantastical, romantic and heartbreaking, I was left speechless and sobbing by the last chapters. The writing is lyrical, the stories unforgettable, with major themes on the fear of being alone and a hunger to leave your mark. Definitely an emotional read, but worth the tears.

Cursed to be forgotten by everyone, everywhere, the moment she leaves their sight, Addie LaRue presses on for centuries, in defiance of the malign, enigmatic spirit that condemned her, and in hope that somewhere, someone will somehow remember, and love her. — Mike Hare

“Epic, beautifully written, heartwarming, and heartbreaking, The Invisible Life of Addie LaRue is a contemplation on life, death, what it means to make your mark on the world, and why we feel it’s important to do so. Addie makes a deal with a demon so she can live her life the way she wants to. But, like most deals, there are strings attached — and these strings make it so she is forgotten by everyone she meets. Dancing about time, the book shows Addie’s life over 300 years and takes a closer look at her modern life — after a boy in a bookshop remembers her. Months later, I’m still thinking about this book and how beautiful it is; my words don’t even come close to doing it justice. Read this book.”
— Lindsey Pattavina, R.J. Julia Booksellers, Madison, CT

A Life No One Will Remember. A Story You Will Never Forget. France, 1714: in a moment of desperation, a young woman makes a Faustian bargain to live forever--and is cursed to be forgotten by everyone she meets. Thus begins the extraordinary life of Addie LaRue, and a dazzling adventure that will play out across centuries and continents, across history and art, as a young woman learns how far she will go to leave her mark on the world. But everything changes when, after nearly 300 years, Addie stumbles across a young man in a hidden bookstore and he remembers her name.

VICTORIA "V. E." SCHWAB is the #1 New York Times bestselling author of more than a dozen books, including the acclaimed Shades of Magic series, the Villains series, This Savage Song, and Our Dark Duet. Her work has received critical acclaim, been featured in the New York Times, Entertainment Weekly, Washington Post and more, been translated into more than a dozen languages, and has been optioned for television and film. When she's not haunting Paris streets or trudging up English hillsides, she lives in Edinburgh, Scotland and is usually tucked in the corner of a coffee shop, dreaming up monsters.