The Hare with Amber Eyes: A Hidden Inheritance (Compact Disc) 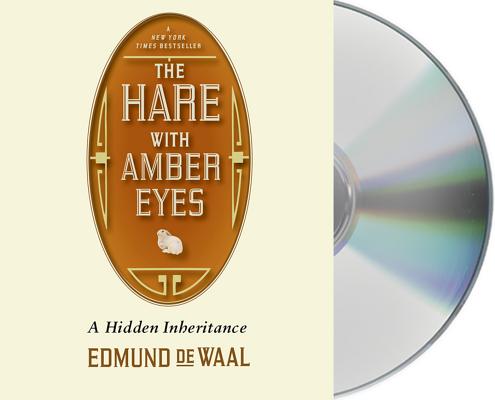 The Hare is a fascinating memoir of a singular & spectacular collection of Nutske sculptures. Written in a rich, texture of people and places the story follows the rise of the Ephrussis Family and their art collections across Europe & 3 tumultous centuries (19th -21stc.) This is an intimate search of forgooten family lore by sensitive artist. Winner of several awards incl. the 2010 COSTA Memoir. — Maeve Noonan

The Ephrussis were a grand banking family, as rich and respected as the Rothschilds, who "burned like a comet" in nineteenth-century Paris and Vienna society. Yet by the end of World War II, almost the only thing remaining of their vast empire was a collection of 264 wood and ivory carvings, none of them larger than a matchbox.

The renowned ceramicist Edmund de Waal became the fifth generation to inherit this small and exquisite collection of netsuke. Entranced by their beauty and mystery, he determined to trace the story of his family through the story of the collection.

The netsuke drunken monks, almost-ripe plums, snarling tigers were gathered by Charles Ephrussi at the height of the Parisian rage for all things Japanese. Charles had shunned the place set aside for him in the family business to make a study of art, and of beautiful living. An early supporter of the Impressionists, he appears, oddly formal in a top hat, in Renoir's "Luncheon of"" the Boating Party." Marcel Proust studied Charles closely enough to use him as a model for the aesthete and lover Swann in "Remembrance of Things Past."

Charles gave the carvings as a wedding gift to his cousin Viktor in Vienna; his children were allowed to play with one netsuke each while they watched their mother, the Baroness Emmy, dress for ball after ball. Her older daughter grew up to disdain fashionable society. Longing to write, she struck up a correspondence with Rilke, who encouraged her in her poetry.

The Anschluss changed their world beyond recognition. Ephrussi and his cosmopolitan family were imprisoned or scattered, and Hitler's theorist on the "Jewish question" appropriated their magnificent palace on the Ringstrasse. A library of priceless books and a collection of Old Master paintings were confiscated by the Nazis. But the netsuke were smuggled away by a loyal maid, Anna, and hidden in her straw mattress. Years after the war, she would find a way to return them to the family she'd served even in their exile.

In "The Hare with Amber Eyes," Edmund de Waal unfolds the story of a remarkable family and a tumultuous century. Sweeping yet intimate, it is a highly original meditation on art, history, and family, as elegant and precise as the netsuke themselves.

Edmund de Waal is one of the world's leading ceramic artists, and his porcelain is held in many major international collections. His bestselling memoir, The Hare with Amber Eyes, was shortlisted for numerous prizes and won the Costa Biography Award and the RSL Ondaatje Prize.


“At one level [Edmund de Waal] writes in vivid detail of how the fortunes were used to establish the Ephrussis’ lavish lives and high positions in Paris and Vienna society. And, as Jews, of their vulnerability: the Paris family shaken by turn-of-the century anti-Semitism surging out of the Dreyfus affair; the Vienna branch utterly destroyed in Hitler’s 1937 Anschluss . . . At a deeper level, though, Hare is about something more, just as Marcel Proust’s masterpiece was about something more than the trappings of high society. As with Remembrance of Things Past, it uses the grandeur to light up interior matters: aspirations, passions, their passing; all in a duel, and a duet, of elegy and irony.” —Richard Eder, The Boston Globe

“Absorbing . . . In this book about people who defined themselves by the objects they owned, de Waal demonstrates that human stories are more powerful than even the greatest works of art.” —Adam Kirsch, The New Republic

“Delicately constructed and wonderfully nuanced . . . There are many family memoirs whose stories are as enticing as Edmund de Waal’s. There are few, though, whose raw material has been crafted into quite such an engrossing and exquisitely written book as The Hare with Amber Eyes . . . One of the great triumphs of The Hare with Amber Eyes . . . is not just the assiduous way in which de Waal interrogates his raw evidence—scattered articles and newspaper cuttings, old paintings, forgotten buildings—but the way he summons up different eras so evocatively . . . [De Waal] is, too, as you would expect of a potter, wonderfully tactile in his investigations, interrogating the physical feel of the Ephrussis’ different buildings, touching surfaces, assessing materials. This sensuality transmits itself also to his prose, which is beautiful to read—lithe and precise, crisp and delicate. The result is a memoir of the very first rank, one full of grace, economy, and extraordinary emotion.” —Andrew Holgate, The Barnes & Noble Review

“Remarkable . . . To be handed a story as durable and exquisitely crafted as this is a rare pleasure . . . Like the netsuke themselves, this book is impossible to put down. You have in your hands a masterpiece.” —Frances Wilson, The Sunday Times (London)

“From a hard and vast archival mass of journals, memoirs, newspaper clippings and art-history books, Mr. de Waal has fashioned, stroke by minuscule stroke, a book as fresh with detail as if it had been written from life, and as full of beauty and whimsy as a netsuke from the hands of a master carver. Buy two copies of his book; keep one and give the other to your closest bookish friend.” —The Economist

“What a treat of a book! It projects an iridescent mirage that once was real, a pageant of exquisite fragility, an aesthetic passion somehow surviving the brutalities of history. Mr. de Waal’s nostalgia is tart, tactile, marvelously nuanced.”—Frederic Morton, author of A Nervous Splendor: Vienna, 1888/1889 and The Rothschilds: Portrait of a Dynasty

“A self-questioning, witty, sharply perceptive book . . . The Hare with Amber Eyes is rich in epiphanic moments . . . By writing objects into his family story [de Waal] has achieved something remarkable.” —Tanya Harrod, The Times Literary Supplement

“A beautiful and unusual book . . . [A] unique memoir of [de Waal’s] family . . . De Waal has a mystical ability to so inhabit the long-gone moment as to seem to suspend inexorable history, personal and impersonal . . .  A work that succeeds in several known genres: as family memoir, travel literature (de Waal’s Japan is the nearest thing to being there, and over decades), essays on migration and exile, on cultural misperceptions, and on de Waal's attempt to define his relationship with his own kaolin creations. His book is also a new genre, unnamed and maybe unnameable.” —Veronica Horwell, The Guardian

“A marvelously absorbing synthesis of art history, detective story and memoir . . . A nimble history of one of the richest European families at the turn of the century . . . Remarkable.” —Kirkus Reviews