The Street of a Thousand Blossoms (Compact Disc) 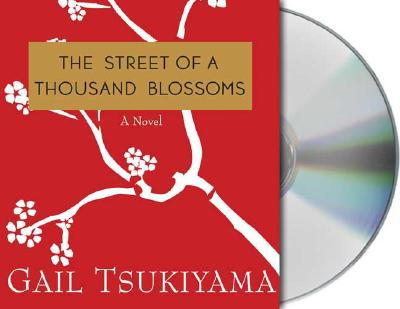 Japan, 1939. On the Street of a Thousand Blossoms in Tokyo, two orphaned brothers are growing up with loving grandparents who inspire them to dream of a future firmly rooted in tradition. The older boy, Hiroshi, shows early signs of promise in sumo wrestling, while Kenji is fascinated by the art of creating exquisite masks for actors in the Noh theater. But as the ripples of war spread all the way to their quiet neighborhood, the brothers must put their dreams on hold--and then forge their own paths in a new Japan. In a powerfully moving story that spans almost thirty years, Gail Tsukiyama brings her acclaimed depth of character and emotion to her biggest canvas yet--an epic novel of tradition and change, of loss and renewal, and above all of the enduring strength of family ties--at a turning point in modern history.

Gail Tsukiyama is the bestselling author of five previous novels, including "Women of the Silk" and "The Samurai's Garden," as well as a recipient of the Academy of American Poets Award and the PEN/Oakland Josephine Miles Award. She divides her time between El Cerrito and Napa Valley, California. Stephen Park has appeared in the films "State of Play," "A Serious Man," "Fargo," "Toys," "Kindergarten Cop," and "Do the Right Thing." He was a regular cast member for one season on "In Living Color" and has appeared on "Law & Order: Criminal Intent," "Mad About You," "The Venture Bros.", and "Friends." Stephen read Gail Tsukiyama's "The Street of a Thousand Blossoms" for Macmillan Audio.

"Gail Tsukiyama expertly and beautifully weaves together the lives of a sumo wrestler and his family, and a Noh Mask Maker through World War II and into the 1960's. She has always been a wonderful story-teller but in The Street of a Thousand Blossoms she proves herself to be a master story-teller." --Jane Hamilton, bestselling author of The Book of Ruth and A Map of the World "Gail Tsukiyama is a writer of astonishing grace, delicacy, and feeling. Her lyric precision serves not only to leave the reader breathless, but to illuminate human suffering and redemption with clarity and power."--Michael Chabon, Pulitzer Prize-winning author of The Amazing Adventures of Kavalier and Clay

"The Street of a Thousand Blossoms is a generational saga, both sweeping and intimate...Tsukiyama tells a powerful story of family, of loss, and of endurance with her usual