Atlas of the Civil War: A Complete Guide to the Tactics and Terrain of Battle (Hardcover) 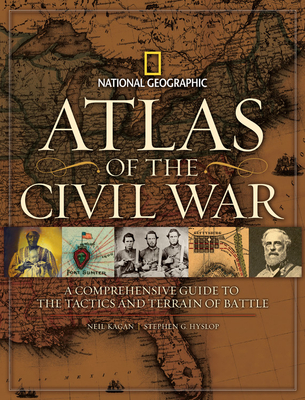 In this one-of-a-kind atlas, scores of archival maps and dozens of newly created maps trace the battles, political turmoil, and great themes of America's most violent and pivotal clash of arms. From the Antebellum South to Fort Sumter, the assassination of Abraham Lincoln, and the fitful peace of Reconstruction, National Geographic's Atlas of the Civil War displays eye-opening maps-and a gripping, self-contained story-on every spread. Eighty-five rare period maps, many seen here for the first time, offer the cartographic history of a land at war with itself: from 19th-century campaign maps surveying whole regions and strategies to vintage battlefield charts used by Union and Confederate generals alike, along with commercial maps produced for a news-hungry public, and comprehensive Theater of War maps. In 35 innovative views created especially for this book, the key moments of major battles are pinpointed by National Geographic's award-winning cartographers using satellite data to render the terrain with astonishing detail. In addition, more than 320 documentary photographs, battlefield sketches, paintings, and artifacts bear eyewitness testimony to the war, history's first to be widely captured on film.

Neil Kagan has contributed to numerous innovative illustrated books including the award-winning Voices of the Civil War and the best-selling Concise History of the World. Stephen G. Hyslop has written several books on American and global history including Eyewitness to the Civil War.