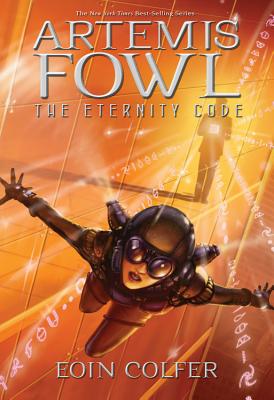 This is book number 3 in the Artemis Fowl series.

From New York Times best-selling author Eoin Colfer comes his third book in the Artemis Fowl series about a teenage criminal mastermind and his siege against dangerous, tech-savvy fairies.

"The world that Colfer creates is as vivid and fantastical as any shire, gotham, or galaxy far, far away in recent memory."--Entertainment Weekly

Artemis Fowl is going straight. As soon as he pulls off the most brilliant criminal feat of his career.

At least, that's the plan when he attempts to sell his C Cube, a supercomputer built from stolen fairy technology. When his efforts to broker a deal for the Cube with a powerful businessman go terribly wrong, his loyal bodyguard and friend Butler is mortally injured. The only thing that will save him is fairy magic, so once again he must contact his old rival, Holly Short.

It's going to take a miracle to save Butler, and Artemis's luck may have just run out.

Eoin Colfer is the New York Times best-selling author of the Artemis Fowl series, Airman, Half Moon Investigations, The Supernaturalist, Eoin Colfer's Legend of... books, The Wish List, Benny and Omar; and Benny and Babe. He lives in Ireland with his wife and two children.