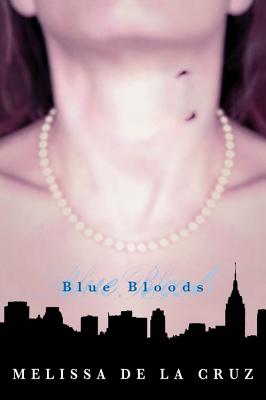 This is book number 1 in the Blue Bloods series.

Schuyler Van Alen is confused about what is happening to her. Her veins are starting to turn blue, and she’s starting to crave raw meat. Soon, her world is thrust into an intricate maze of secret societies and bitter intrigue.
Schuyler has never been a part of the trendy crowd at her prestigious New York private school. Now, all of a sudden, Jack Force, the most popular guy in school, is showing an interest in her. And when one of the popular girls is found dead, Schuyler and Jack are determined to get to the bottom of it.

Schuyler wants to find out the secrets of the mysterious Blue Bloods. But is she putting herself in danger? Melissa de la Cruz’s vampire mythology, set against the glitzy backdrop of New York City, is a juicy and intoxicating read.

Melissa de la Cruz is the author of the best-selling Au Pairs novels for teens and the co-author of the popular adult title The Fashionista Files: Adventures in Four-Inch Heels and Faux Pas. Melissa has appeared as an expert on style, trends, and celebrity for CNN and the E! Entertainment network and is a frequent contributor to popular magazines like Glamour, Marie Claire, Teen Vogue, and Cosmopolitan. She lives in Los Angeles with her husband. Melissa is not a Blue Blood, but she knows people who are…