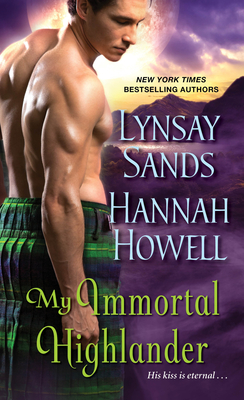 New York Times bestselling powerhouse authors Lynsay Sands and Hannah Howell return to the windswept Highlands of 16th century Scotland in the captivating story of identical twin brothers trapped between the curse that has been their legacy and the two women whose love is their destiny...

As identical twins, Bothan and Calum MacNachton share a bond stronger than most brothers, one forged by a terrible secret. Rumors and dark tales have been whispered about their clan for centuries. For they roam the Highlands at night, driven by a savage hunger that can never be sated. Their only hope lies in marriage to Outsiders, mortal women whose pure blood will weaken the hold of their eternal curse.

Kenna Brodie and Sarra DeCourcey know what it is to stand apart. They've heard the terrible, whispered warnings, but nothing could prepare them for the handsome brothers whose fierce, unyielding desires are beyond any legend...

What Bothan and Calum promise is a life unlike any Kenna and Sarra have ever known. Now, Kenna and Sarra must choose whether to betray their dark lords or stand and fight for a passion that will
never die...

Lynsay Sands is the New York Times bestselling author of the Argeneau vampire series as well as more than fifteen historical novels and anthologies. She lives in Canada.

Hannah Howell is the New York Times and USA Today bestselling author of acclaimed historical romances. Howell, twice awarded the Golden Leaf Award, has been a Romance Writers of America RITA Award Finalist, received RT Book Reviews' Career Achievement Award for Historical Storyteller of the Year, and has had her books on Amazon's Top 10 Romances of the Year list. She lives in West Newbury, Massachusetts with her family. Visit her website at hannahhowell.com.