Monsters in the Fog (Hardcover) 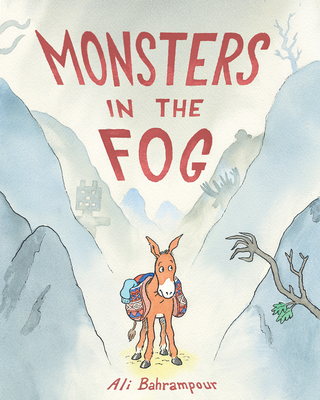 A clever and warm-hearted trip into the mountain fog humorously reminds youngsters that not all unknown or unfamiliar creatures (or people) are monsters to be feared. Hakim the donkey learns repeatedly that appearances can be deceiving- the scary monsters hidden in the mountain mist are just friendly animals whose appearance is, at first, distorted by fog! And then, in a fitting, final twist, the one creature we encounter who really is a monster is Hakim's friend. Loving everyone for who they are despite appearance is the message of kindness that kids will enjoy as they read and re-read this one, again and again. — Jon Fine

A donkey’s trip up the mountain turns eerie when he encounters “monsters” along the way in this humorous, suspenseful tale about challenging first impressions

Hakim is traveling up the mountain to visit his friend Daisy, but the fog is so thick that he can't see the road ahead. Then an old goat appears out of nowhere and delivers a sinister warning: “Beware! Beware! There are monsters up there!”

Hakim trots with caution, until he hears an awful groan, growing closer and closer. And out of the mist comes the strangest creature Hakim has ever seen. . . .

Is Hakim doomed? Or are things not always what they seem? In this clever story about how appearances can be deceiving, Ali Bahrampour reminds us that everyone looks like a monster in the fog—until you get closer.

Ali Bahrampour grew up in Tehran, Iran, and the United States. He was a 2011 recipient of the Sendak Fellowship for picture book artists and is the author-illustrator of A Pig in the Palace. He lives in New York City with his family.

**STARRED REVIEW**
"The cartoonish humor of the drawings provides a perfect counterpart to the calm, concise language of the tale’s spare sentences, much as Hakim’s steady resolve provides counterpoint to the jitters of his companions. With a subtle moral—everything is a monster in the fog—that is rendered playfully but is still thought-provoking."

"Plays on viewer expectations, but the real fun comes from the opportunity to guess what the fog illusions really are at storytime."
— The Bulletin of the Center for Children's Books

"The watercolor illustrations are dramatically composed, full of humor, and punctuated with mysterious glowing fog. A book that is perfect for storytime and, with its clean design and accessible text, also for new readers."
— The Horn Book Magazine

"'It’s hard to knit a sweater with your hooves,' writes Bahrampour (A Pig in the Palace) in the irresistible opening to this parable about curiosity versus fear, 'but Hakim somehow did it,'. . .he book’s meaning is unmistakable, and even urgent: snap judgments and trepidation are no way to move forward in the world."
— Publishers Weekly