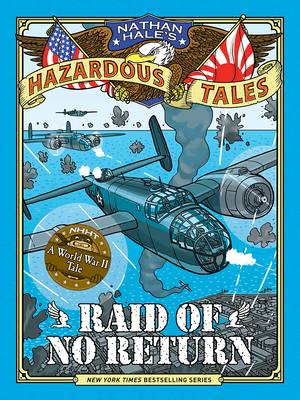 Presented in the author’s instantly recognizable artistic and storytelling style, this colorful, exciting book of history for kids starts with a brief explanation of the events leading up to World War II and then describes the bombing of Pearl Harbor from both the Japanese and American points of view.

The American response was a super-secret counterattack organized by stunt pilot Jimmy Doolittle. Just four months after Pearl Harbor, American crews would launch sixteen B-25 bombers from the aircraft carrier USS Hornet to drop bombs on the Japanese capital Tokyo and then fly to safety in China. Everything about the mission was as dangerous as it was secret. B-25s were not designed to take off from an aircraft carrier. Japan had formidable air defenses. There was no way to plan for landing in China or returning safely to America.

The Doolittle Raid, as it became known, went down in miliary history as one of the most creative and harrowing missions of World War II. The pilots and crews became American heroes.

Nathan Hale is the #1 New York Times bestselling author and illustrator of the Nathan Hale’s Hazardous Tales series. He also wrote and illustrated the graphic novels One Trick Pony and Apocalypse Taco. Hale lives in Utah, and you can find him online at nathanhaleauthor.com.

"Harrowing and no detail is left out . . . Hale’s tendency to incorporate character commentary, infographics, and fun facts will draw readers. Give this title to readers interested in action-packed graphic novels."
— School Library Journal