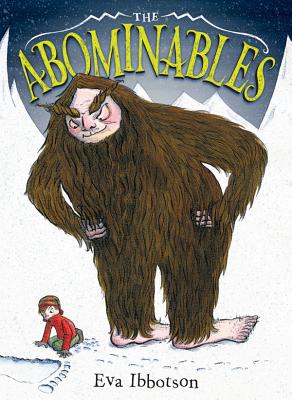 Transporting five not-at-all-abominable snowmen to a stately home in England is classic Ibbotson. In this, her last novel (she died in 2010) the beloved author gives us a family of gentle Yetis with Mt. Everest-sized personalities. If Ibbotson is new to you, think Roald Dahl - but sweeter. — Jennifer Armstrong


Renowned literary great Eva Ibbotson delivers a final novel in her classic, much-loved style. A previously unpublished work from this favorite author, The Abominables follows a family of yetis who are forced, by tourism, to leave their home in the Himalayas and make their way across Europe to a possible new home. Siblings Con and Ellen shepherd the yetis along their eventful journey, with the help of Perry, a good-natured truck driver. Through a mountain rescue in the Alps and a bullfight in Spain, the yetis at last find their way to an ancestral estate in England—only to come upon a club of voracious hunters who have set their sights on the most exotic prey of all: the Abominable Snowmen.

Briskly funny and full of incident, The Abominables is vintage Ibbotson. With unforgettable characters and thoughtful messages about the environment and advocacy, it’s a generous last gift to her many devoted fans.

"A satiric farewell from a favorite author."

"A memorable finale to a treasured body of work."

"The novel is full of whimsy, charm, and sly humor. The yetis will tug at readers’ heartstrings and make them laugh. The writing is lean, witty, and subtle. Ibbotson manages to touch on ethical messages of human rights, advocacy, and environmentalism without being obvious."

The writing is skillful, precise, and frequently funny, and it offers an effective counterbalance to some of the story’s more serious social criticism..."

--Bulletin of The Center for Children’s Books

Eva Ibbotson has long been a favorite of both children and adult readers on both sides of the Atlantic. Her novels include The Secret of Platform 13, Which Witch?, The Great Ghost Rescue, Island of the Aunt, Dial-a-Ghost, and Journey to the River Sea, which won the Smarties Prize. She died in 2010, in her home in Newcastle, England.