Fine Just the Way It Is: Wyoming Stories 3 (Paperback) 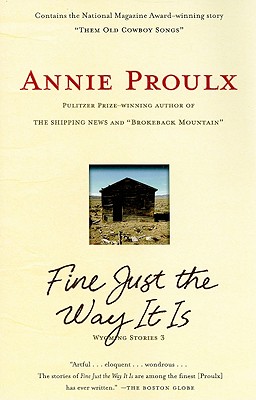 Ms. Proulx's unerring sense of place -- of being able to summon up a tangible landscape on the printed page -- is very much in evidence in this collection of stories. Existing in an unforgiving terrain, her vibrant characters possess an indomitable spirit and a refusal to capitulate to the ravages of time and of life. — Alden Graves

“Annie Proulx is a master. Her prose is tight and direct, and, cutting through predictability and cliche, she fashions stories, plots, and characters full of intense truths about humanity. Thrilling to read.”
— Drea Firth, Maria's Bookshop, Durango, CO

Winner of two O. Henry Prizes, Annie Proulx has been anthologized in nearly every major collection of great American stories. Her bold, inimitable language, her exhilarating eye for detail, her dark sense of humor, and her compassion inform this profoundly compelling collection of stories.

Proulx creates a fierce, visceral panorama of American folly and fate in these nine dazzling stories about multiple generations of Americans struggling through life in the West. Each character is a pioneer of a sort—some are billionaires, some are escapists, and some just think the rest of the country has it wrong. Deeply sympathetic to the men and women fighting to survive in this harsh place, Proulx turns their lives into fiction with the power of myth, leaving the reader in awe.

Annie Proulx is the author of nine books, including the novels The Shipping News and Barkskins, and the story collection Close Range. Her many honors include a Pulitzer Prize, a National Book Award, the Irish Times International Fiction Prize, and a PEN/Faulkner award. Her story “Brokeback Mountain,” which originally appeared in The New Yorker, was made into an Academy Award–winning film. Fen, Bog, and Swamp is her second work of nonfiction. She lives in New Hampshire.

"[Fine Just the Way It Is] bears Proulx's brand of hard drama, hard irony, hard weather and hard and soft characters blown about and many times destroyed by the powerful mix..... She writes like a demon." -- Ron Carlson, The New York Times Book Review

"Vivid.... In the tour de force finale ... we see the method in Proulx's genius, where he enchanting description, unparalleled sentence structure, and unwavering insight combine to reveal both the coldest and most resilient recesses of the human heart." -- Pam Houston, O, the Oprah Magazine

"Astonishing.... 'Tits-up in a Ditch' breaks new literary ground with the gut-wrenching tale of an Iraq veteran who returns to her family raw with grief... unforgettable characters." -- Publishers Weekly, starred review

"[Fine Just the Way It Is] takes gigantic steps toward securing Proulx's position as one of the most inventive yet, at the same time, traditional story writers working today." -- Booklist, starred review

"[Proulx] shows without mincing words that the present-day West is every bit as inhumane and vengeful as it was way back when... Excellent and original...." -- Kate Christensen, Elle