One Square Inch of Silence: One Man's Quest to Preserve Quiet (Paperback) 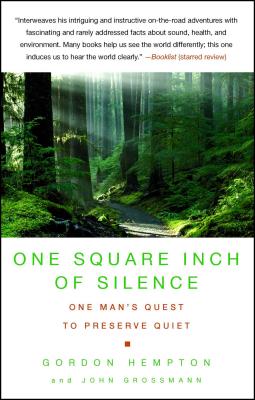 “This fascinating look at the often overlooked problem of noise pollution is a rousing call to action and a wonderful record of one man's search for the quiet places of America. One Square Inch of Silence has opened my eyes and ears to a whole new dimension of life -- sounds and the very rare lack thereof -- and it has, literally, changed my life.”
— Jenn Northington, The King's English, Salt Lake City, UT

In the visionary tradition of Rachel Carson’s Silent Spring, One Square Inch of Silence alerts us to beauty that we take for granted and sounds an urgent environmental alarm. Natural silence is our nation’s fastest-disappearing resource, warns Emmy-winning acoustic ecologist Gordon Hempton, who has made it his mission to record and preserve it in all its variety—before these soul-soothing terrestrial soundscapes vanish completely in the ever-rising din of man-made noise. Recalling the great works on nature written by John Muir, John McPhee, and Peter Matthiessen, this beautifully written narrative, co-authored with John Grossmann, is also a quintessentially American story—a road trip across the continent from west to east in a 1964 VW bus. But no one has crossed America like this. Armed with his recording equipment and a decibel-measuring sound-level meter, Hempton bends an inquisitive and loving ear to the varied natural voices of the American landscape—bugling elk, trilling thrushes, and drumming, endangered prairie chickens. He is an equally patient and perceptive listener when talking with people he meets on his journey about the importance of quiet in their lives. By the time he reaches his destination, Washington, D.C., where he meets with federal officials to press his case for natural silence preservation, Hempton has produced a historic and unforgettable sonic record of America. With the incisiveness of Jack Kerouac’s observations on the road and the stirring wisdom of Robert Pirsig repairing an aging vehicle and his life, One Square Inch of Silence provides a moving call to action. More than simply a book, it is an actual place, too, located in one of America’s last naturally quiet places, in Olympic National Park in Washington State.

Gordon Hempton is an acoustic ecologist and Emmy Award-winning sound recordist.  For nearly 25 years he has provided professional audio services to musicians, galleries, museums, and media producers, including Microsoft, Smithsonian, National Geographic, Discovery, National Public Radio, and numerous other businesses and organizations. He has received recognition from the Charles A. Lindbergh Fund, National Endowment for the Arts, and the Rolex Awards for Enterprise. He studied botany and plant pathology at the University of Wisconsin. His sound portraits, which record quickly vanishing natural soundscapes, have been featured in People Magazine, a national PBS television documentary, "Vanishing Dawn Chorus," which earned him an Emmy Award for “Outstanding Individual Achievement.” Hempton has now circled the globe three times in pursuit of environmental sound portraits. His new audio series--Environmental Sound Portraits--is the first new work to appear in more than a decade. He lives in Port Angeles, WA.

John Grossmann has been a freelance writer of magazine articles and books for nearly all of his working career.  He has written on as wide a range of topics as implied by the following list of magazines that have published his work:  Air & Space/Smithsonian, Audubon, Cigar Aficionado, Esquire, Geo, Gourmet, Health, Inc.,  National Geographic Traveler, The New York Times Magazine, Outside, Parade, Saveur, Smithsonian, Sports Illustrated, and USA Weekend.  He ghostwrote the 2006 book Smart Moves for Liberal Arts Grads (Ten Speed Press); and before that wrote the 100-year history of one of the nation’s oldest and most successful summer camps, YMCA Camp Belknap, which he attended as a camper and leader and where his two sons have also been campers and leaders.

“Interweaves his intriguing and instructive on-the-road adventures with
fascinating and rarely addressed facts about sound, health, and
environment. Many books help us see the world differently; this one
induces us to hear the world clearly.”—Booklist, Starred Review