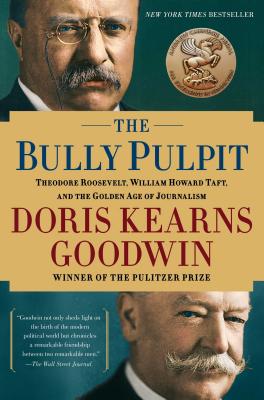 Roosevelt used his “bully pulpit” to initiate the Progressive Era, with the help of the “muckraking” press. But his friend Taft compromised it all when he succeeded Teddy. Another outstanding examination of a critical time in US history by a superior historian. — Louise Jones

Doris Kearns Goodwin has a great talent for taking historical events and finding a propulsive narrative line that makes those events come alive for the reader. In this case, she hangs the story of how the progressive wing of the Republican party developed in parallel to the friendship and collaboration of Teddy Roosevelt and William Howard Taft. It's a story that is very relevant to the widening income gap in the U. S. today. Whether you identify as part of the one percent or the ninety-nine percent, this book makes clear that we have been here before - at the turn of the last century no less. As ambition and political differences drive a wedge between Roosevelt and Taft, one can't help but hope that the two friends will reconcile even as the baton of progressive values is taken up by the Democratic party under Wilson.

The subtitle of the book includes the phrase "The Golden Age of American Journalism," and Goodwin presents the staff of McClure's magazine as exemplifying the finest Journalism of the era. While the chapters about McClure's do cover a lot of interesting background information, that story could easily have made up an entire book on its own.

Pulitzer Prize–winning author and presidential historian Doris Kearns Goodwin’s dynamic history of Theodore Roosevelt, William H. Taft and the first decade of the Progressive era, that tumultuous time when the nation was coming unseamed and reform was in the air.

Winner of the Carnegie Medal.

Doris Kearns Goodwin’s The Bully Pulpit is a dynamic history of the first decade of the Progressive era, that tumultuous time when the nation was coming unseamed and reform was in the air.

The story is told through the intense friendship of Theodore Roosevelt and William Howard Taft—a close relationship that strengthens both men before it ruptures in 1912, when they engage in a brutal fight for the presidential nomination that divides their wives, their children, and their closest friends, while crippling the progressive wing of the Republican Party, causing Democrat Woodrow Wilson to be elected, and changing the country’s history.

The Bully Pulpit is also the story of the muckraking press, which arouses the spirit of reform that helps Roosevelt push the government to shed its laissez-faire attitude toward robber barons, corrupt politicians, and corporate exploiters of our natural resources. The muckrakers are portrayed through the greatest group of journalists ever assembled at one magazine—Ida Tarbell, Ray Stannard Baker, Lincoln Steffens, and William Allen White—teamed under the mercurial genius of publisher S.S. McClure.

Goodwin’s narrative is founded upon a wealth of primary materials. The correspondence of more than four hundred letters between Roosevelt and Taft begins in their early thirties and ends only months before Roosevelt’s death. Edith Roosevelt and Nellie Taft kept diaries. The muckrakers wrote hundreds of letters to one another, kept journals, and wrote their memoirs. The letters of Captain Archie Butt, who served as a personal aide to both Roosevelt and Taft, provide an intimate view of both men.

The Bully Pulpit, like Goodwin’s brilliant chronicles of the Civil War and World War II, exquisitely demonstrates her distinctive ability to combine scholarly rigor with accessibility. It is a major work of history—an examination of leadership in a rare moment of activism and reform that brought the country closer to its founding ideals.

“If you find the grubby spectacle of today’s Washington cause for shame and despair—and really, how could you not?—then I suggest you turn off the TV and board Doris Kearns Goodwin’s latest time machine. … [Goodwin puts] political intrigues and moral dilemmas and daily lives into rich and elegant language. Imagine ‘The West Wing’ scripted by Henry James.”
— Bill Keller, The New York Times Book Review

"In her beautiful new account of the lives of Theodore Roosevelt and William Howard Taft, historian Doris Kearns Goodwin spins a tale so gripping that one questions the need for fiction when real life is so plump with drama and intrigue."
— Associated Press

“Doris Kearns Goodwin tells this tale with her usual literary skill and deep research. … Goodwin not only sheds light on the birth of the modern political world but chronicles a remarkable friendship between two remarkable men.”
— The Wall Street Journal

“This sophisticated, character-driven book tells two big stories. . . . This is a fascinating work, even a timely one. . . . It captures the way a political party can be destroyed by factionalism, and it shows the important role investigative journalists play in political life.”
— The Economist

“Here is where Goodwin’s account soars. She captures with masterly precision the depth of the Roosevelt-Taft relationship, the slow dissolution and the growing disillusion, the awkward attempts at rapprochement, and then the final break....It is a story worth telling, and one well told.”
— The Boston Globe

“The interplay between personality and politics, temperament and leadership is one of the key themes animating Doris Kearns Goodwin’s telling books…The same is true of her sprawling new book, The Bully Pulpit, which gives us revealing portraits of Theodore Roosevelt and his close friend, handpicked successor and eventual bitter rival, William Howard Taft…She also uses her impressive narrative skills to give us a visceral sense of the world in which Roosevelt and Taft came of age...She creates emotionally detailed portraits of the two men’s families, provides an informed understanding of the political forces (conservative, moderate and insurgent) arrayed across the country at the time, and enlivens even highly familiar scenes like Teddy Roosevelt’s daring charge up San Juan Hill.”
— Michiko Kakutani

“Goodwin spent eight years working on The Bully Pulpit and the effort shows, much to the reader’s benefit and delight. She keeps the story clipping along, chooses enlightening anecdotes…and has the narrative and historical acumen to weave her theme through 900 pages. At 70, let’s hope she has at least a couple more biographies in mind…For now, savor The Bully Pulpit. It is a command performance of popular history."
— Christian Science Monitor

“Pulitzer Prize-winning author Doris Kearns Goodwin has scored again with ‘The Bully Pulpit,’ a thorough and well-written study of two presidents, as well as the journalists who covered them and exposed scandals in government and industry….Her genius in this huge volume (750 pages of text) is to take the three narratives and weave them into a comprehensive, readable study of the time ….The Bully Pulpit is a remarkable study of a tumultuous period in our history.”
— St. Louis Post-Dispatch

“Swiftly moving account of a friendship that turned sour, broke a political party in two and involved an insistent, omnipresent press corps. . . . It’s no small achievement to have something new to say on Teddy Roosevelt’s presidency, but Goodwin succeeds admirably. A notable, psychologically charged study in leadership.”
— Kirkus Reviews, Starred Review

“By shining a light on a little-discussed President and a much-discussed one, Goodwin manages to make history very much alive and relevant. Better yet—the party politics are explicitly modern.”
— Publishers Weekly, Starred Review

“These fascinating times deserve a chronicler as wise and thorough as Goodwin. The Bully Pulpit is splendid reading.”
— Dallas Morning News

“Goodwin’s evocative examination of the Progressive world is smart and engaging. . . . She presents a highly readable and detailed portrait of an era. The Bully Pulpit brings the early 20th century to life and firmly establishes the crucial importance of the press to Progressive politics.”
— The Washington Post