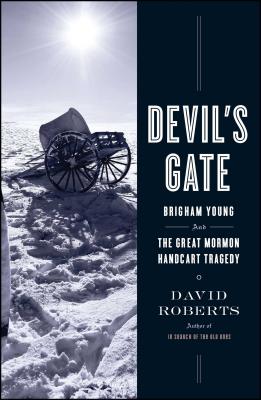 In 1856, five separate groups of Mormons set out on the arduous 1,300 mile journey between Iowa City and Salt Lake City. They were only allowed 17 pounds of belongings that were pushed by hand in wooden carts. Two of the groups began the trek too late in the season and were caught in severe snowstorms in Wyoming. Before rescuers could reach them between 200-240 men, women, and children had perished. It was the deadliest tragedy in the history of the settlement of the West. This book is the result of painstaking research and it very often conflicts with the Mormon Church's version of the grueling and completely avoidable event. A testimony to human folly, to the perils of religious fervor and to man's remarkable ability to endure. — Alden Graves

The revelatory story, now in paperback, of the worst disaster in the history of the Western migrations—and how Brigham Young made it a parable of the indomitable Mormon spirit.

• Dramatic re-telling of a terrible but little-known tragedy: In 1856, 220 Mormons traveling west to Utah, pushing and pulling their belongings in handcarts, died of malnutrition and hypothermia. Roberts draws on contemporary letters and diaries to re-create the drama and suffering.

• A powerful indictment of Brigham Young: Young had been warned that the pilgrims were at risk from winter storms; he could have waited until the next year or sent aid eastward sooner but failed to do so until it was too late. Not only have Young’s biographers ignored or minimized this tragic and preventable event, they’ve tacitly accepted the official version of the story, which casts it as an unavoidable act of God that tested—and proved—the faith and steadfastness of the Mormon spirit.

• Follows the success of other books about the Mormons: Devil’s Gate will appeal to the same readers that made Jon Krakauer’s Under the Banner of Heaven and Steven Naifeh and Gregory White Smith’s The Mormon Murders into explosive, national bestsellers.

"Devil's Gate is the chilling story of the greatest disaster in the history of American westward settlement: the Mormon handcart tragedy. With meticulous research and elegant writing, Roberts tells a gripping story of impoverished Europeans brought to the New World with a promise of hope, who died in the wilderness of the American West under the most appalling circumstances. It is more than just history: it is an indictment of fundamentalism itself. This book is proof that people who are serenely certain they know the mind of God are not only presumptuous, they are dangerous. Devil's Gate is a book of history with an important message for the modern world." -- Douglas Preston, author of Blasphemy and The Monster of Florence

" This disturbing account of the Mormon immigrants who in 1856 pushed handcarts for more than 1,000 miles from Iowa to Salt Lake City is narrative history at its best. It's also pertinent to our time, for David Roberts shows how, in the cover-up of the most deadly catastrophe in the history of Western migration, political and religious leaders turned failed experiments into triumphs and tragedies into hymnals. Roberts has swept away the cobwebs in his stirring book." -- Ted Morgan, author of Wilderness at Dawn and A Shovel of Stars

" The tragedy of the handcart people forms the largest carnage of the Western migration and is one of the great wounds that made Mormonism America's most successful native religion. David Roberts in this fine book shows how the dying came not from bad luck, not from early snows, not from God, but from the Prophet Brigham Young and his pursuit of profit and power. An eye-opener on the man who brought Zion to our desert and our national life." -- Charles Bowden, author of Desierto and Blues for Cannibals