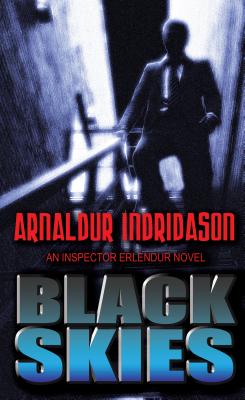 By Arnaldur Indridason, Victoria Cribb (Translator)
Call or email to see if a used copy is available.
Out of Print

Arnaldur Indridason, whom "The Sunday Times "calls "one of the most brilliant crime writers of his generation," has thrilled readers around the world with his series set in Reykjavik. In "Black Skies, " Indridason further cements his position as one of today's top international crime writers.
A man is making a crude leather mask with an iron spike fixed in the middle of the forehead. It is a "death mask," once used by Icelandic farmers to slaughter calves, and he has revenge in mind. Meanwhile, a school reunion has left Inspector Erlendur's colleague Sigurdur Oli unhappy with life in the police force. While Iceland is enjoying an economic boom, Oli's relationship is on the rocks and soon even his position in the department is compromised. When a favor to a friend goes wrong and a woman dies before his eyes, Oli has a murder investigation on his hands.
From the villas of Reykjavik's banking elite to a sordid basement flat, "Black Skies "is a superb story of greed, pride, and murder from one of Europe's most successful crime writers. "A sophisticated and complex thriller."
--"Kirkus"

ARNALDUR INDRIDASON won the CWA Gold Dagger Award for "Silence of the Grave "and is the only author to win the Glass Key Award for Best Nordic Crime Novel two years in a row. The film of "Jar City "was Iceland's entry for the Academy Award for Best Foreign Film, and the film "Silence of the Grave" is in production with the same director. The film "Contraband, " starring Mark Wahlberg, was based on an Icelandic film written by Indridason, who lives in Reykjavik, Iceland.