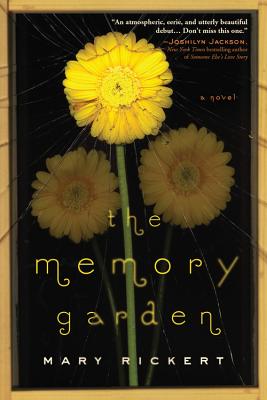 The "Memory Garden" is a thoughtful aromatic delight of memory, rue and violets. Mythology, garden spells and goddess lore are all woven together in a tale of love, loss and the humor that binds friendships of women together.The love these women bear for each other, in true kindred spirit have consequences; both on this earthy plane and the one inhabited by ghosts. The Memory Garden is reminiscent of Alice Hoffman but wholly in Mary Rickerts' own strong voice. — Maeve Noonan

A beautiful story about mothers and daughters, old friends and new, the living and the dead, and all the magic that binds these relationships together! Great read for book clubs or just a pleasant novel for the beach! And she's a local author too! — Jess Elder

Winner of the 2015 LOCUS AWARD for Best First Novel

In a beautifully written tale woven together with magic and mystery, flowers and food, Bay Singer finally discovers the secrets her mother has been hiding.

Bay Singer has bigger secrets than most.

Not that she knows about them. Her mother, Nan, is sure that the burden of those secrets would be too much, and that's why she never told anyone the truth, not even Bay.

There's a lot that Nan's kept quiet over the years, especially those times with Mavis and Ruthie?times that were dark and full of guilt.

But some secrets have a power all their own, and Nan realizes she needs Mavis and Ruthie now more than ever. When the three meet again in Nan's garden, their reunion has spellbinding effects that none of them could have imagined, least of all Bay...

An enchanting fantasy, fans of Alice Hoffman, Sarah Addison Allen, will be captivated by Mary Rickert, the World Fantasy and Crawford Award--winning author.

What reviewers are saying about The Memory Garden:

"A totally CHARMING, totally ENGAGING story told by Rickert, a magus of the first order. MAGIC IN EVERY LINE." -- Karen Joy Fowler, author of We Are All Completely Beside Ourselves and The Jane Austen Book Club

"The Memory Garden is one of the most intense fantasy books I've read in years...reminds me a bit of Terry] Pratchett's Tiffany Aching books, but also of some of my favorite literary novels about misfits who invent themselves as they go along. I've seldom read a book that's as gentle, and yet as powerful, as The Memory Garden." -- io9

..". a blend of poetical language and dark suspense... 'The Memory Garden' is a tale of tragedy, hope and kinship." -- The Washington Post

" A] BEWITCHING MARVEL of a book." -- BookPage ..". absolutely STUNNING." -- Christopher Barzak, author of One for Sorrow