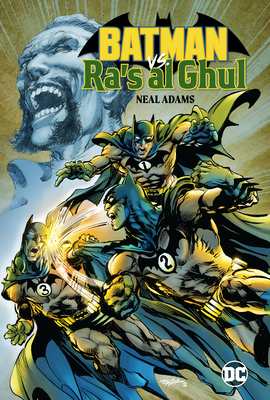 Gotham City is under seige by terrorists, and Batman is determined to find the source. But when Boston Brand tries to intervene, he discovers an even more disturbing and deadly truth: the terrorists are led by an inhuman monster. Ra's al Ghul has volunteered his own private security force to aid the GCPD, and now they are the only thing standing between nuclear terror and the townspeople.
But al Ghul's true goal is hidden from everyone's eyes. He will destroy the city and kill Batman -- this time for good. Watching in horror is...Bruce Wayne?

Considered the groundbreaking artist of the 1960s, Neal Adams was born June 6, 1941, in New York City. He attended Manhattan's High School of Industrial Art and, while still a student, found work ghosting the Bat Masterson syndicated newspaper strip and drawing gag cartoons for Archie Comics. Neal received his own comic strip, based on the popular TV series Ben Casey, in 1962. The strip ran until 1965, at which time Neal made the move to comics for Warren Publishing and DC Comics. Neal's realistic style on such strips as Deadman and Green Lantern/Green Arrow, at odds with the more cartoony comics of the day, made him an immediate star. He became DC's premier cover artist, contributing radical and dynamic illustrations to virtually the company's entire line. Neal's work has also appeared in Marvel's X-Men, The Avengers and Thor, on paperback book covers and on stage, as the art director for the Broadway science fiction play Warp. In the 1970s Neal and partner (and frequent inker) Dick Giordano started the art agency Continuity Associates, out of which came, in the 1980s, Continuity Comics. Neal is the winner of several Alley, Shazam and Inkpot awards, and was inducted into the Harvey Awards' Jack Kirby Hall of Fame in 1999.