Superman: A Celebration of 75 Years (Hardcover) 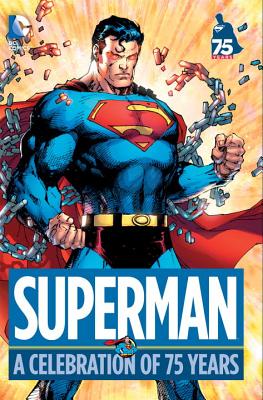 By Various, Various (Illustrator)
$39.99
Hard to Find - May no longer be available

The perfect gift to help celebrate Superman's 75th Anniversary. A collection of stories spanning 1938 to 2012 from a variety of authors and artists - Jerry Siegel, Joe Shuster, Grant Morrison to Alex Ross.

When Superman debuted seventy-five years ago, it was not merely the beginning for one character, but for an entire genre. The phrase "super hero" had yet to be coined when ACTION COMICS #1 hit newsstands in 1938, but once Superman entered the scene, effortlessly lifting a car above his head on that first iconic cover, the character paved the way for each of the hundreds (if not thousands) of super-powered heroes written since.

SUPERMAN: A CELEBRATION OF 75 YEARS gathers a range of stories featuring the first and greatest super hero, highlighting the many roles the Man of Steel has played over the decades. In these celebrated stories, Superman is in turns the Herculean champion, the lonely alien survivor, the super-powered Boy Scout and the soul-searching leader. Over the course of seventy-five years, watch as the character grows from a simple strongman to the beloved international symbol he is today!

Born in 1914 in Cleveland, Ohio, Jerome Siegel was, as a teenager, a fan of the emerging literary genre that came to be known as science fiction. Together with schoolmate Joe Shuster, Siegel published several science-fiction fan magazines, and in 1933 they came up with their own science-fiction hero -- Superman. Siegel scripted and Shuster drew several weeks' worth of newspaper strips featuring their new creation, but garnered no interest from publishers or newspaper syndicates. It wasn't until the two established themselves as reliable adventure-strip creators at DC Comics that the editors at DC offered to take a chance on the Superman material -- provided it was re-pasted into comic-book format for DC's new magazine, ACTION COMICS.
Siegel wrote the adventures of Superman (as well as other DC heroes, most notably the Spectre, his co-creation with Bernard Baily) through 1948 and then again from 1959-1966, in the interim scripting several newspaper strips including Funnyman and Ken Winston. Jerry Siegel died in January, 1996.

Joseph Shuster was born in 1914 in Toronto, Canada. When he was nine, his family moved to Cleveland, Ohio, where Shuster met Jerry Siegel. The two became fast friends and collaborators; together, they published the earliest science-fiction fan magazines, where Shuster honed his fledgling art skills. In 1936, he and Siegel began providing DC Comics with such new features as Dr. Occult, Slam Bradley and Radio Squad before selling Superman to DC in 1938.  Influenced by such comic-strip greats as Wash Tubbs' Roy Crane, Joe Shuster drew Superman through 1947, after which he left comic books to create the comic strip Funnyman, again with Siegel. Failing eyesight cut short his career, but not before his place in the history of American culture was assured. Shuster died of heart failure on July 30, 1992.