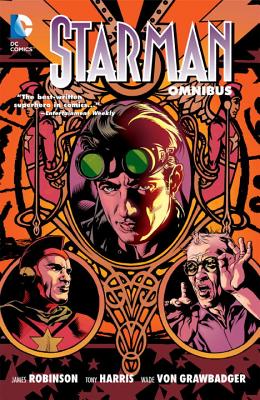 By James Robinson
$29.99
Hard to Find - May no longer be available

This is book number 1 in the Starman Omnibus series.

A slacker is forced to take over the family business: Being a superhero. A real gem of a series, with unmatched writing and art. Destined to be a hidden classic. — Chris Linendoll

The super-heroic legacy of Starman is renewed in these stories, in which Jack Knight--antiques collector and dealer--inherits the name and powers of his father's old Starman identity from his older brother, who has been assassinated. Reluctantly adjusting to his role, Jack reinvents the look of Starman, ditching the traditional red and green in favor of black leather and aviator goggles. But Jack has inherited more than a heroic identity from his brother . . . he's also gained a foe: the beautiful but mentally unbalanced Nash, daughter of the villain known as the Mist. Jack also must come to grips with the Shade, the morally ambiguous former villain who decides to become Jack's mentor.

James Robinson is an acclaimed, award-winning writer whose works include STARMAN and JSA: THE GOLDEN AGE. He was co-writer with matt Wagner on SANDMAN MYSTERY THEATRE and with Geoff Johns he co-wrote HAWKMAN. In addition, he wrote the screenplay to THE LEAGUE OF EXTRAORDINARY GENTLEMEN, starring Sean Connery, and created the acclaimed young readers comic series LEAVE IT TO CHANCE.