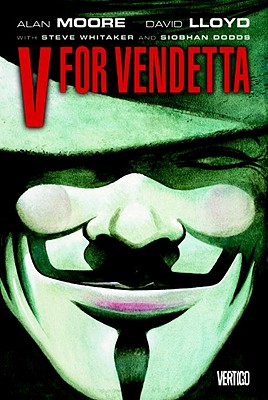 Set in a futurist totalitarian England, a country without freedom or faith, a mysterious man in a white porcelain mask strikes back against the oppressive overlords on behalf of the voiceless. Armed with only knives and his wits, V, as he’s called, aims to bring about change in this horrific new world. His only ally? A young woman named Evey Hammond. And she is in for much more than she ever bargained for…

A visionary graphic novel that defines sophisticated storytelling, this powerful tale detailing the loss and fight for individuality has become a cultural touchstone and an enduring allegory for current events. Master storytellers Alan Moore and David Lloyd are at the top of their craft in this terrifying portrait of totalitarianism and resistance.

This paperback edition collects the classic graphic novel, which served as inspiration for the hit 2008 film from Warner Bros.

“Mr. Moore, a native of Northampton, England, distinguished himself as a darkly philosophical voice in the medium of comic books — a rare talent whose work can sell solely on the strength of his name.”—The New York Times

“It is a good book, it is smart, and there's no doubt that it remains relevant.” —The Guardian

“It’s difficult not to be sucked into V’s take on anarchy. —PopMatters