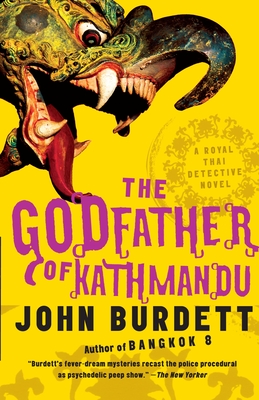 This is book number 4 in the Royal Thai Detective Novels series.

John Burdett's famed Royal Thai detective Sonchai Jitpleecheep is put to the test both as a Buddhist and as a cop as he confronts the most shocking crime of his career.

A rich American film director has been murdered. It is an intriguing case, and solving it could lead to a promotion for Sonchai, but, as always, he is far more concerned with the state of his karma than he is with his status in the earthly realm. To complicate matters his boss, Colonel Vikorn, has decided to make Sonchai his consigliere in a heroin smuggling operation. Sonchai travels to Kathmandu to meet Vikorn's connection Tietsin, a Tibetan Buddhist monk, and falls under the sway of this dark and charismatic guru.

John Burdett is the author of A Personal History of Thirst, The Last Six Million Seconds, Bangkok 8, Bangkok Tattoo, and Bangkok Haunts. He divides his time between Thailand and France.

"John Burdett is writing the most exciting set of crime novels in the world."--The Oregonian

"A Thai tale of corruption, mayhem and intrigue."--San Francisco Chronicle

“It is the mordant wit of his exhaustively observant ‘monk manqué’ hero that fuels this blissful and dexterous book.”—Houston Chronicle

“This is a novel brimming with observations and arguments, with absurdity and jokes . . . Witty, learned, and wild.”—The Washington Post Book World

“The spiciest yet of Burdett’s exotic dishes.”—The Times (London)

“Block out several hours to read it in one sitting. Once you start, you won’t get anything else done until you finish it.”—Bookpage (Mystery of the Month)

“A dizzying array of multifaceted storylines. . . . Burdett juggles the various plots with great dexterity . . . A whirlwind of a novel.”—Booklist (starred)