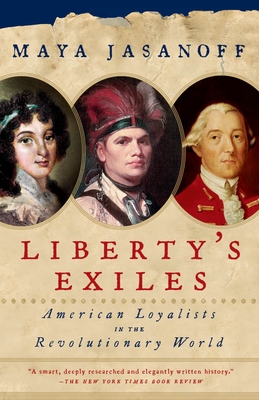 One of the most important books about the Revolution in a long time...seriously. Start by thinking of the rebellion as civil war and then consider what became of 75,000 exiled Americans at war's end. Splendid writing and terrific research. — Bill Lewis

This groundbreaking book offers the first global history of the loyalist exodus to Canada, the Caribbean, Sierra Leone, India, and beyond.

At the end of the American Revolution, sixty thousand Americans loyal to the British cause fled the United States and became refugees throughout the British Empire. Liberty’s Exiles tells their story. This surprising new account of the founding of the United States and the shaping of the post-revolutionary world traces extraordinary journeys like the one of Elizabeth Johnston, a young mother from Georgia, who led her growing family to Britain, Jamaica, and Canada, questing for a home; black loyalists such as David George, who escaped from slavery in Virginia and went on to found Baptist congregations in Nova Scotia and Sierra Leone; and Mohawk Indian leader Joseph Brant, who tried to find autonomy for his people in Ontario. Ambitious, original, and personality-filled, this book is at once an intimate narrative history and a provocative analysis that changes how we see the revolution’s “losers” and their legacies.

Maya Jasanoff is the Coolidge Professor of History at Harvard. She is the author of the prize-winning Edge of Empire: Lives, Culture, and Conquest in the East, 1750-1850 (2005) and Liberty's Exiles: American Loyalists in the Revolutionary World (2011), which received the National Book Critics Circle Award for Non-Fiction and the George Washington Book Prize. A 2013 Guggenheim Fellow, Jasanoff won the 2017 Windham-Campbell Prize for Non-Fiction. Her essays and reviews appear frequently in publications including The New York Times, The Guardian, and The New York Review of Books.


“Spirited and engaging . . . [Jasanoff] has turned her remarkable historical talents to the experiences of the tens of thousands of loyalists who felt compelled to leave the North American colonies that became the United States. . . . One of the strengths of her deeply researched book is the extent to which she was able to recover the stories of some of these loyalist refugees.” —Gordon S. Wood, The New York Review of Books


“A masterful account of the dispersal of the loyalists. . . . Jasanoff’s notable achievement is to engage the reader’s interest, and sympathies, in the travails of the Revolution’s losers. It will be thoroughly rewarding, even for the reader already familiar with the fates of the winners.” —The Boston Globe


“Ambitious, empathetic and sometimes lyrical...Liberty's Exiles just claims to be the 'first global history of the loyalist diaspora' . . . Jasanoff skillfully threads the stories of individual loyalists through her narrative as she beautifully describes, one by one, the often inhospitable places  they went.” —The Washington Post


“[There are] many revelations in this very well-researched and fluently written book…Jasanoff has written [the loyalists] a fitting tribute.” —Andrew Roberts, The Daily Beast


“A fascinating, important  and beautifully written investigation that ought to be required reading for anyone who thinks America's founding was an unambiguous instance of liberty and justice throwing off the shackles of tyranny and oppression.”  —The Seattle Times


“A relatively neglected subject, now handsomely addressed by Maya Jasanoff. [Her] ability to blend structural analysis with engrossing accounts of personal experience makes Liberty’s Exiles a highly readable book as well as an informative one.” —The Wall Street Journal


“You have GOT to buy this book.” —DennisMansfield.com

"Smart and gracefully written . . . Liberty's Exiles tells a complex and original story of the loyalists. It is a history worth knowing.” —The Wilson Quarterly


“Losers seldom get to write the history, but the American loyalists have at last got their historian with Maya Jasanoff.  This is not just the story of their poignant and often tragic fate during the war for independence, but also the story of the loyalist diaspora, the experience of 60,000 men and women, black and white, as they spread into Canada, the Caribbean, Africa, and India.  No one has told this story before, and Jasanoff tells it with uncommon style and grace.” —Joseph J. Ellis


“The days are long gone when American history was written not only by the victors but also about them. Yet we have had to wait too long for a history of the Loyalists who fought against the American Revolution, and lost. Maya Jasanoff has done more than merely rescue them from the condescension of posterity. She has made them live on the page. I can think of few books published in the past thirty years that shed more brilliant and revelatory light on the events of the revolutionary era than Liberty’s Exiles. It is more than just a work of first-class scholarship on a par with Linda Colley’s Britons. It is a deeply moving masterpiece that fulfils the historian’s most challenging ambition: to revivify past experience.” —Niall Ferguson


“Liberty's Exiles is a book which in scope and originality, global reach and research, intellectual curiosity and sheer provocative panache—upturning in its wake whole applecarts of unchallenged assumptions—can sustain comparison with Linda Colley or the young Simon Schama. The truth is that Maya Jasanoff is not just a very good writer, an indefatigable researcher and a fine historian, she is also a bit of a genius.” —William Dalrymple


“Maya Jasanoff’s Liberty's Exiles places the loyalist experience and the aftermath of the American Revolution in an entirely new light. Alongside the Spirit of 1776, Jasanoff gives us the Spirit of 1783, dedicated to remaking the mighty British Empire, and then offers a stunning reinterpretation of the Loyalists’ complicated role in that remaking. Her meticulously researched and superbly written account  is historical revision at its finest, and it affirms her place as one of the very finest historians of the rising generation.” —Sean Wilentz


“A masterful account of the struggles, heartbreak, and determination that characterized specific Loyalist families and individuals. . . . [A] superb study of a little known episode in American and British history.” —Publishers Weekly (starred)

“[E]xhaustively researched and very well written. . . . [Jasonoff] skillfully weav[es] into her work the stories of individual loyalists, British officials, and others. She is as good at close-in, detailed narrative as she is at detached, balanced analysis of the forces at work. Liberty's Exiles—which provides, she notes, ‘the first global history of the loyalist diaspora’—belongs on the short shelf of indispensable books about the American Revolution’s losers.” —Commonweal