Enemies: A History of the FBI (Hardcover) 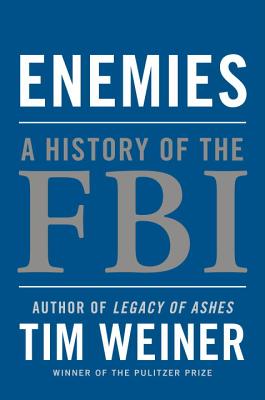 A comprehensive history of an organization that has been at the vanguard of every major national and international trauma of the past century, with varying degrees of effectiveness. Informative and compelling, but probably not reassuring, on the state of the American intelligence network. — Alden Graves

“Fast-paced, fair-minded, and fascinating, Tim Weiner’s Enemies turns the long history of the FBI into a story that is as compelling, and important, as today’s headlines.”—Jeffrey Toobin, author of The Oath

Enemies is the first definitive history of the FBI’s secret intelligence operations, from an author whose work on the Pentagon and the CIA won him the Pulitzer Prize and the National Book Award.

We think of the FBI as America’s police force. But secret intelligence is the Bureau’s first and foremost mission. Enemies is the story of how presidents have used the FBI as the most formidable intelligence force in American history.

Here is the hidden history of America’s hundred-year war on terror. The FBI has fought against terrorists, spies, anyone it deemed subversive—and sometimes American presidents. The FBI’s secret intelligence and surveillance techniques have created a tug-of-war between protecting national security and infringing upon civil liberties. It is a tension that strains the very fabric of a free republic.

“Absorbing . . . a sweeping narrative that is all the more entertaining because it is so redolent with screw-ups and scandals.”—Los Angeles Times

Tim Weiner has won the Pulitzer Prize for his reporting and writing on secret intelligence and national security. As a correspondent for "The New York Times, "he covered the Central Intelligence Agency in Washington and terrorism in Afghanistan, Pakistan, the Sudan, and other nations. "Enemies" is his fourth book. His "Legacy of Ashes: The History of the CIA "won the National Book Award and was acclaimed as one of the year's best books by "The New York Times, The Economist, The Washington Post, Time, "and many other publications. "The Wall Street Journal" called "Betrayal" "the best book ever written on a case of espionage." He is now working on a history of the American military.

“Pulitzer-Prize–winning author Tim Weiner has written a riveting inside account of the FBI’s secret machinations that goes so deep into the Agency’s skullduggery, readers will feel they are tapping the phones along with J. Edgar Hoover. This is a book that every American who cares about civil liberties should read.”—Jane Mayer, author of The Dark Side

“Enemies is a research masterpiece. Picking through seventy thousand newly declassified documents and using on-the-record interviews, Weiner reveals startling new truths and debunks nagging old myths about the FBI. Enemies reads like a thriller, but don’t let the heart-pumping prose fool you. Weiner has written a scholarly tour de force that will be an instant classic for any serious student of American national security.”—Amy B. Zegart, Ph.D., Stanford University, author of Spying Blind

“Tim Weiner’s Enemies is the most comprehensive history of the FBI as an intelligence agency we have ever had. Based on extensive research in previously unavailable materials, Weiner gives us a fresh way to think about J. Edgar Hoover, the many presidents he worked with, and the FBI as a national security agency. The book is also a cautionary tale that is essential reading for anyone concerned about American civil liberties.”—Robert Dallek, author of An Unfinished Life