The Black Swan: Second Edition: The Impact of the Highly Improbable: With a new section: "On Robustness and Fragility" (Incerto #2) (Hardcover) 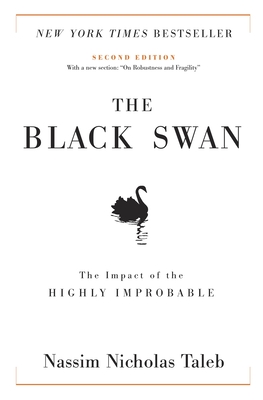 This is book number 2 in the Incerto series.

An enormously interesting, thought-provoking and worthwhile book. Taleb is a massive intellect with a point - this is a useful book as well as a fascinating one. Not bedtime reading, though. — Chris Morrow

The most influential book of the past seventy-five years: a groundbreaking exploration of everything we know about what we don’t know, now with a new section called “On Robustness and Fragility.”

A black swan is a highly improbable event with three principal characteristics: It is unpredictable; it carries a massive impact; and, after the fact, we concoct an explanation that makes it appear less random, and more predictable, than it was. The astonishing success of Google was a black swan; so was 9/11. For Nassim Nicholas Taleb, black swans underlie almost everything about our world, from the rise of religions to events in our own personal lives.

Why do we not acknowledge the phenomenon of black swans until after they occur? Part of the answer, according to Taleb, is that humans are hardwired to learn specifics when they should be focused on generalities. We concentrate on things we already know and time and time again fail to take into consideration what we don’t know. We are, therefore, unable to truly estimate opportunities, too vulnerable to the impulse to simplify, narrate, and categorize, and not open enough to rewarding those who can imagine the “impossible.”

For years, Taleb has studied how we fool ourselves into thinking we know more than we actually do. We restrict our thinking to the irrelevant and inconsequential, while large events continue to surprise us and shape our world. In this revelatory book, Taleb will change the way you look at the world, and this second edition features a new philosophical and empirical essay, “On Robustness and Fragility,” which offers tools to navigate and exploit a Black Swan world.

Taleb is a vastly entertaining writer, with wit, irreverence, and unusual stories to tell. He has a polymathic command of subjects ranging from cognitive science to business to probability theory. Elegant, startling, and universal in its applications, The Black Swan is a landmark book—itself a black swan.

Nassim Nicholas Taleb has devoted his life to problems of uncertainty, probability, and knowledge. He spent nearly two decades as a businessman and quantitative trader before becoming a full-time philosophical essayist and academic researcher in 2006. Although he spends most of his time in the intense seclusion of his study, or as a flâneur meditating in cafés, he is currently Distinguished Professor of Risk Engineering at New York University’s Polytechnic Institute. His main subject matter is “decision making under opacity”—that is, a map and a protocol on how we should live in a world we don’t understand.

Taleb’s books have been published in forty-one languages.

“The most prophetic voice of all.”—GQ

Praise for The Black Swan

“A masterpiece.”—Chris Anderson, editor in chief of Wired, author of The Long Tail

“The Black Swan changed my view of how the world works.”—Daniel Kahneman, Nobel laureate

“[Taleb writes] in a style that owes as much to Stephen Colbert as it does to Michel de Montaigne. . . . We eagerly romp with him through the follies of confirmation bias [and] narrative fallacy.”—The Wall Street Journal

Black Swan: The Impact of the Highly Improbable
$12.00
Very Good