The Last Hours of Ancient Sunlight: Revised and Updated Third Edition: The Fate of the World and What We Can Do Before It's Too Late (Paperback) 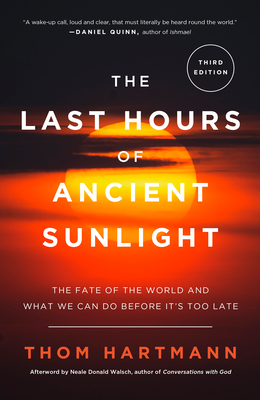 While everything appears to be collapsing around us – ecodamage, genetic engineering, virulent diseases, the end of cheap oil, water shortages, global famine, wars – we can still do something about it and create a world that will work for us and for our children’s children. The inspiration for Leonardo DiCaprio’s feature documentary movie The Eleventh Hour and soon to be released HBO special Ice on Fire, Last Hours of Ancient Sunlight details what is happening to our planet, the reasons for our culture’s blind behavior, and how we can fix the problem. Thom Hartmann’s comprehensive book is one of the fundamental handbooks of the environmental activist movement. Now with fresh, updated material on our Earth’s rapid climate change and a focus on political activism and its effect on corporate behavior, The Last Hours of Ancient Sunlight helps us understand – and heal – our relationship to the world, to each other, and to our natural resources.

Thom Hartmann is an award-winning author, international lecturer, teacher, and psychotherapist. His books have been written about in Time magazine, he has been on the front page of the Wall Street Journal, and he has been featured as a guest on numerous radio and TV shows, including NPR's "All Things Considered," CNN, and BBC. A former journalist, editor, and occasional woodsplitter, he lives in Vermont with his wife, Louise.

“Thom Hartmann seeks out interesting subjects from such disparate outposts of curiosity that you have to wonder whether or not he uncovered them or they selected him.” – Leonardo DiCaprio

“The more of us who heed Thom Hartmann’s passionate message, the more likely it is that our highest hopes, rather than our darkest fears, will come to pass.” – John Robbins, founder of EarthSave and author of Diet for a New America
“Thom is a national treasure. Read him, embrace him, learn from him, and follow him as we all work for social change.” – Robert Greenwald (Brave New Films)