Love and Hate in Jamestown: John Smith, Pocahontas, and the Start of a New Nation (Paperback) 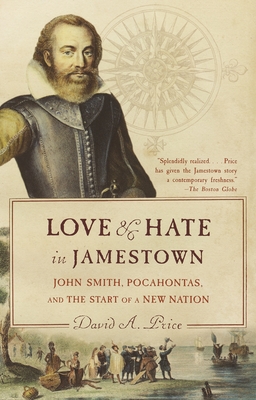 By David A. Price
$16.95
Click Title for IN STOCK Location

Practical, resilient, realistic, shrewd: John Smith emerges as an early American hero, responsible for assuring the survival of Jamestown in a violent and unpredictable environment. Yet his survival depended, twice, on an equally brave native girl named Pocahontas. — Mike Hare

A New York Times Notable Book and aSan Jose Mercury News Top 20 Nonfiction Book of 2003In 1606, approximately 105 British colonists sailed to America, seeking gold and a trade route to the Pacific. Instead, they found disease, hunger, and hostile natives. Ill prepared for such hardship, the men responded with incompetence and infighting; only the leadership of Captain John Smith averted doom for the first permanent English settlement in the New World.The Jamestown colony is one of the great survival stories of American history, and this book brings it fully to life for the first time. Drawing on extensive original documents, David A. Price paints intimate portraits of the major figures from the formidable monarch Chief Powhatan, to the resourceful but unpopular leader John Smith, to the spirited Pocahontas, who twice saved Smith’s life. He also gives a rare balanced view of relations between the settlers and the natives and debunks popular myths about the colony. This is a superb work of history, reminding us of the horrors and heroism that marked the dawning of our nation.

David A. Price has written for The Wall Street Journal, The Washington Post, USA Today, Forbes, and Business 2.0. He was formerly a reporter in the Washington, D.C., bureau of Investor's Business Daily. He holds degrees from Harvard Law School, Cambridge University, and the College of William and Mary. He was raised in Richmond, Virginia, and now lives with his wife and their two sons in Washington, D.C.

“Splendidly realized. . . . Price has given the Jamestown story a contemporary freshness.”–The Boston Globe

“Solid and engaging. . . . Price focuses on the human story of Jamestown, nearly mythic in its resonances.” --The New York Times

“Price clears away the misconceptions and sugar-coated half truths to reveal the true story of the Virginia Colony. . . . Full of drama, tragedy, and heartbreak.” --Richmond Times-Dispatch

“Price’s well-researched book skillfully weaves together period letters and historical documents into a narrative and is an engaging and detailed account of the many lives that clashed during the founding of Virginia.” --US News & World Report

“A scrupulously researched retelling. . . . One cannot help but be impressed by the depth and breadth of Price’s knowledge.” --The Philadelphia Inquirer

“Not only intellectually palatable, but also a juicy feast of compelling storytelling. . . . Love and Hate in Jamestown deserves an honored spot in any history buff’s library.” –Dallas-Fort Worth Star-Telegram

“Greed, arrogance, intrigue, valor, stupidity, suspense, and cataclysmic tragedy . . . Price interweaves all these elements with a graceful, reportorial style that never forgets the humanity of the individuals involved.” –Orlando Sentinel

“The most historically correct and stylistically elegant rendering of John Smith and Pocahontas that I have ever read.” –Joseph J. Ellis, author of Founding Brothers

“The story David Price tells so lucidly is far more compelling than the popular tale. . . . A splendid book.” –The Christian Science Monitor

“John Smith . . . is scrupulously brought to life. . . . Price has re-created a figure to whom this nation owes a debt.” —Dallas Morning News

“A superb narrative of the founding of the first colony.” –The New York Sun

“[Price] has perused literally all existing record, letters, articles, manuscripts, shipping accounts, slavery files, and other accounts to bring us the real story of the complex first years of the colony. . . . A valuable study.” –The Decatur Daily

“[An] admirable new history. . . . A fine book, one that personifies the virtues I esteem in a work of popular history: clarity, intelligence, grace, novelty, and brevity.” –David L. Beck, San Jose Mercury News

“[An] impeccably researched and very able retelling . . . The intersection of the Jamestown story with the careers of Smith and Pocahontas makes a fascinating narrative, and Price has done it full justice.” –The Independent (London)