Noises Off: A Play in Three Acts (Paperback) 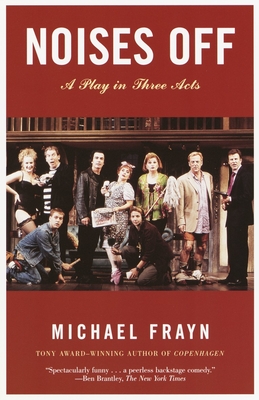 Noises Off is not one play but two: simultaneously a traditional sex farce, Nothing On, and the backstage “drama” that develops during Nothing On’s final rehearsal and tour. The two begin to interlock as the characters make their exits from Nothing On only to find themselves making entrances into the even worse nightmare going on backstage. In the end, at the disastrous final performance, the two plots can be kept separate no longer, and coalesce into a single collective nervous breakdown.

Michael Frayn has written plays, novels, and screenplays, in additioin to being a journalist, documentary filmmaker, and translator of Chekhov. His thirteen plays include Copenhagen, which was awarded the Tony Award for Best Play, as well as the Outer Critics Circle and Drama Desk awards and, in the United Kingdom, the Olivier and Evening Standard awards. His novel Headlong was shortlisted for the Booker Prize. His most recent novel, Spies, was published in 2002. Born in London in 1933 and educated at Cambridge, Frayn is married to the biographer and critic Claire Tomalin; they live in London.