Simon and the Bear: A Hanukkah Tale (Hardcover) 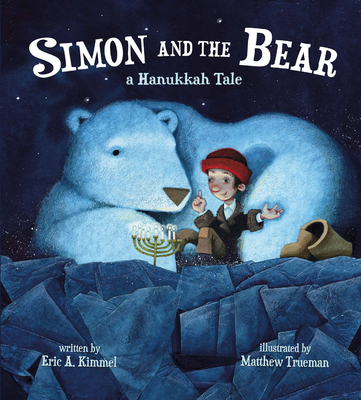 This wholly original story weaves in the traditions and beliefs associated with Hanukkah. When young Simon is stranded on an ice floe on his way to America, a Menorah and a polar bear are his saving graces. His belief in miracles and the origin of Hanukkah light the way to his rescue and good fortune for him and his family upon arrival in America. — Jessica Wood

Enjoy a Hanukkah tale full of wonder and miracles from the author of the classic Hershel and the Hanukkah Goblins.

Before Simon sails to America, he promises his family that he will get a job and send for them. Simon's mother knows he will need a miracle, so she reminds him to celebrate Hanukkah wherever he may be. Little does either of them know that Simon will spend the first night of Hanukkah on an ice floe after his ship sinks. The lone survivor out in the wide ocean, Simon lights the first candle, and it attracts a visitor: a polar bear.

Does she eat him? No! She shares his latkes, enjoys his songs, goes fishing for him, and even keeps him warm at night. By the last day of Hanukkah, Simon has nearly given up hope of ever being rescued. But then he recounts all of the miracles that have befallen him so far. Perhaps it is not too much to hope for one more, he thinks, as he lights all of the candles in the menorah. The bright glow signals a passing ship, and Simon makes it to New York after all. This fanciful Hanukkah tale -- like none you've ever read before -- celebrates eight miracles: family, friendship, hope, selflessness, sharing, faith, courage, and love.

From the author of the Caldecott Honor-winning classic Hershel and the Hanukkah Goblins comes a gorgeously illustrated fantasy Hanukkah tale full of miracles, from sharing latkes with a polar bear to surviving a Titanic-like sinking. The story behind the ancient holiday is included at the end.

Eric A. Kimmel was born in Brooklyn, New York, and decided in kindergarten that he wanted to be an author someday. He has published close to 150 books, many of which have won prestigious awards, such as the Caldecott Honor Medal (Hershel and the Hanukkah Goblins, illustrated by Trina Schart Hyman), and the Sydney Taylor Picture Book Award (The Chanukkah Guest, illustrated by Giora Carmi, and Gershon's Monster, illustrated by Jon J Muth). He is a five-time winner of the National Jewish Book Award and received the Sydney Taylor Lifetime Achievement Award from the Association of Jewish Libraries. Eric and his wife, Doris, live in Portland, Oregon.

Matthew Trueman grew up in northern Italy and returned to the States to attend the Ringling School of Art and Design, where he earned a B.F.A. in illustration. He has done magazine and advertising work and has illustrated several award-winning children's books, including When the Chickens Went on Strike, Noah's Mittens, and A Picture for Marc. He works from a studio in his home by the Delaware River, where he lives with his wife, Anna, and their daughter, Mina.