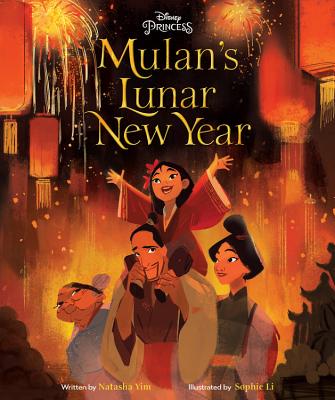 It's the Lunar New Year, and it happens to be Mulan's favorite festival! There is a lot to do to prepare for this important celebration, and for the first time, Mulan is old enough to help out. But everything Mulan does seems to turn out wrong. . . . Follow along with Mulan in this special Lunar New Year story that captures the unique sense of magic, imagination, and possibility that surrounds the holiday!

Natasha Yim is an American Chinese author of fiction and non-fiction works for children and young adults. She is the author of Otto's Rainy Day, Cixi: The Dragon Empress, Sacajawea of the Shoshone, and Goldy Luck and the Three Pandas. She lives in Ukiah, California with her husband and three children.

Illustrator Sophie Li is a Chinese visual development artist working in animation and film both in Los Angles and Beijing, China. She relocated to the United States when she was 16, and has a BFA in Film and Television from New York University's Tisch School of the Arts. She worked on concept designs for films, commercials, exhibition art and character model designs for animated TV series such as Marvel's Spiderman, Guardians of the Galaxy and Avengers. She currently is co-running an animation studio, Zeet Animation, in Beijing, China.