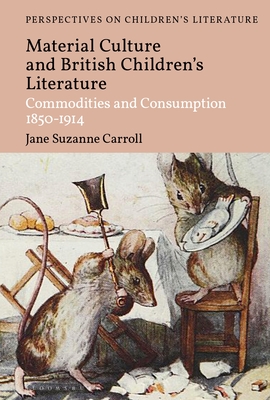 The 'golden age' of children's literature in the late 19th and early 20th century coincided with a boom in the production and trade of commodities. The first book-length study to situate children's literature within the consumer culture of this period, British Children's Literature and Material Culture explores the intersection of children's books, consumerism and the representation of commodities within British children's literature. In tracing the role of objects in key texts from the turn of the century, Jane Suzanne Carroll uncovers the connections between these fictional objects and the real objects that child consumers bought, used, cherished, broke, and threw away. Beginning with the Great Exhibition of 1851, this book takes stock of the changing attitudes towards consumer culture - a movement from celebration to suspicion - to demonstrate that children's literature was a key consumer product, one that influenced young people's views of and relationships with other kinds of commodities.

Drawing on a wide spectrum of well-known and less familiar texts from Britain, this book examines works from Lewis Carroll's Through the Looking Glass, and What Alice Found There and E. Nesbit's Five Children & It to Christina Rossetti's Speaking Likenesses and Mary Louisa Molesworth's The Cuckoo Clock. Placing children's fiction alongside historical documents, shop catalogues, lost property records, and advertisements, Carroll provides fresh critical insight into children's relationships with material culture and reveals that even the most fantastic texts had roots in the ordinary, everyday things.