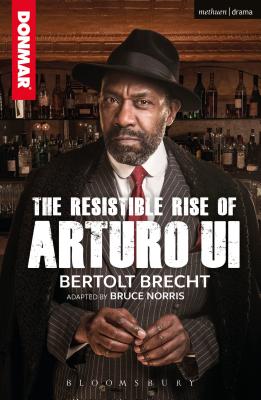 Here's some advice:
Don't ever underestimate Arturo.
You'll be found out and stopped, eventually,
Just like I stopped this fuckin' treachery
And better late than never. Now ya see
What happens when ya fuck with me, ya lousy
Rat-fuck bastards?


Chicago. A city of jazz and gangsters, prohibition and poverty. Amongst the murk of the Great Depression, there's room for a small time crook like Arturo Ui to make a name for himself.

Ui and his henchmen just want to look after you, to offer protection for workers, for jobs, for businesses. Nothing to fear. But a little bribery here, some harmless corruption there, and soon something much more dangerous takes hold.

Brecht's satirical masterpiece about the rise of a demagogue has been adapted by Pulitzer, Olivier and Tony award-winning American playwright Bruce Norris. It was published for the world premiere at the Donmar Warehouse, London, which opened on 21 April 2017 starring Lenny Henry.

Bertolt Brecht (1898-1956) was a major dramatist of the twentieth century, and the founder of one of the most influential theatre companies, the Berliner Ensemble. He created of some of the landmark plays of the twentieth century: The Threepenny Opera, Life of Galileo, Mother Courage and her Children and The Caucasian Chalk Circle. Bruce Norris is the author of Clybourne Park, which won the Olivier and Evening Standard Awards (London) for Best Play, 2010, as well as the Pulitzer Prize for Drama, 2011, and the Tony Award for Best Play in 2012. Other plays include The Infidel (2000), Purple Heart (2002), We All Went Down to Amsterdam (2003), The Pain and the Itch (2004), The Unmentionables (2006) and The Qualms (2014), all of which had their premieres at Steppenwolf Theatre, Chicago. Recent productions include The Low Road (2013 at the Royal Court Theatre (London), Domesticated (2013 at Lincoln Center Theatre), and The Qualms at Playwrights Horizons in 2015.