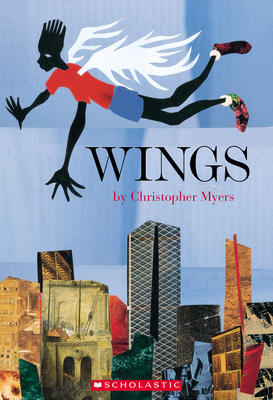 Are you brave enough to be your true self? Ikarus Jackson is, but it isn't always easy. The people in his neigborhood point at his wings. The kids at school laugh. The teachers call him a distraction. One girl identifies with Ikarus, but she is too shy to speak up for herself, let alone for him. Maybe I should have said something to those mean kids, she thinks, when their taunts send him drifting into the sky.

Inspired by Ikarus's own courage, she sets out in search of him and so begins her own journey of self discovery -- leaving both of them transformed.

"I wanted to create a book that tells kids never to abandon the things that make them different, to be proud of what makes them unique. Every child has their own beauty, their own talents. Ikarus Jackson can fly through the air; I want kids to find their own set of wings and soar with him." -- Christopher Myers

The son of acclaimed author Walter Dean Myers, award-winning illustrator Christopher Myers credits his appreciation of the importance of images to observing the objects and photographs his parents would bring home from auctions and flea markets: “little histories;” “other people's memories that get left behind.” His own family images have had quite an impact, as well - as in a black-and-white photograph of his grandfather with a telling smile on his face. “He was a storyteller. His thick, dark, calloused hands told stories. My father tells stories. I tell stories. I'm fascinated with work, what work is, who does work, how much our identities are wrapped up in what we do with our hands. Shoeshine boy, ditchdigger, painter. My grandfather laughed at my father's hands because they were too soft. Still I think he was proud of the fact that my father didn't have to work with his back. This is progress.”

Myers has made his career working with his hands in yet another way, creating his own images in collage, photos, woodcuts, and other artistic media. A graduate of Brown University, he has participated in the exclusive Whitney Museum of American Art Independent Studio Program. Myers began his children's book career doing research to help his father, and went on to illustrate the elder Myers' Shadow of the Red Moon. In 1998, the two collaborated on Harlem, which was named a Caldecott Honor Book as well as a Coretta Scott King Honor Book. Myers' solo effort, Black Cat, was also a Coretta Scott King Honor Book.

In addition to his fine art and illustrative work, Christopher Myers is a clothing designer. He makes his home in Brooklyn, New York.