The Edge of Great (Julie and the Phantoms, Season One Novelization) (Paperback) 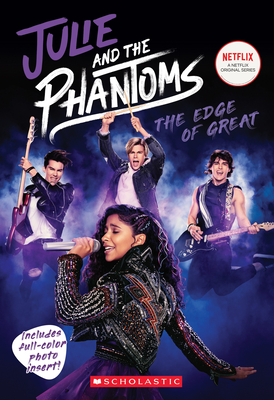 By Micol Ostow
$7.99
Click Title for IN STOCK Location

Learn how Julie and the Phantoms bring their rock-and-roll dreams to life in this novel based on season one of the new Netflix show from Descendants director Kenny Ortega!

After the passing of her mom, Julie has lost her passion for music and is on the verge of being kicked out of her performing arts high school. That is, until she makes the ultimate comeback with her new band, Julie and the Phantoms. There's only one catch: All of her bandmates are ghosts.

Back in the 1990s, Luke, Reggie, and Alex were on the cusp of rock stardom with their band, Sunset Curve, before an unfortunate encounter with Los Angeles street food brought their rock band dreamsand livesto an end. Now, with Julie as their lead singer, the guys have a second chance to make it big and to help Julie discover the real power of music.

This novel based on season one of the hit Netflix series Julie and the Phantoms is told in alternating points of view and includes a full-color photo insert and exclusive story content not seen on the show!

Micol Ostow has written over 50 works for readers of all ages, including projects based on properties like Buffy the Vampire Slayer, Charmed, and most recently, Mean Girls: A Novel. As a child she drew her own Archie comics panels, and in her former life as an editor she published the Betty & Veronica Mad Libs game. She lives in Brooklyn with her husband and two daughters who are also way too pop culture-obsessed. Visit her online at micolostow.com.