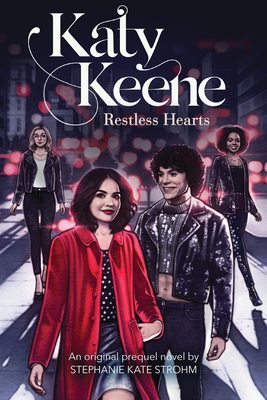 An original prequel novel based on the hit CW show Katy Keene!Before Katy, Jorge, Pepper, and Josie were best friends, they were just four teenagers following their dreams. Katy Keene is struggling to get by after her mom's death. That is, until she gets a call from her old friend Veronica Lodge with the opportunity of a lifetime. Uptown, Jorge Lopez is trying to break into Broadway. There's an open call coming up that could make his dreams a reality-but landing the role might mean pretending he's someone else.According to the tabloids, Pepper Smith is one of the most notorious socialites in the city. Good thing they don't know the truth about her past.And Josie McCoy left Riverdale to tour the country and pursue her dreams. But if she wants to become a star, it might be time for a change. . .Told from alternating points of view, this Katy Keene prequel novel is an original story not seen on the show!

Stephanie Kate Strohm is the author of It's Not Me, It's You; The Taming of the Drew; Pilgrims Don't Wear Pink; Confederates Don't Wear Couture; and Prince in Disguise. She grew up on the Connecticut coast, where a steady diet of Little House on the Prairie turned her into a history nerd at an early age. After graduating with a joint major in theater and history from Middlebury College, she acted her way around the country, performing in more than 25 states. Although she was born in New York, she currently lives in Chicago, and doesn't discriminate against any type of pizza. When she's not writing, she loves baking, walking her dog Lorelei, taking dance cardio classes too seriously, and playing board games with her husband.