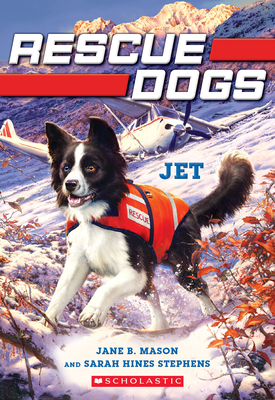 By Jane B. Mason, Sarah Hines-Stephens
$7.99
Click Title for IN STOCK Location

Action and adventure with high stakes and a happy ending -- and dogs!
Jet is a border collie puppy tired of feeling hungry and lonely. He's tired of the collar that yanks at his neck and the leash that makes things worse. When his owners move away and leave him tied up in the backyard, it seems like Jet is running out of time.
When Jet is saved by a home inspector, he's taken to the Sterling Center, where he shows all the classic signs of a great rescue dog, but he's terrified of the leash. When a plane goes down in the wilderness and a snowstorm is moving in, will Jet be able to overcome his fear in time to become a hero?

Jane B. Mason lives in Oakland, California, where she spends her time adjusting to her teenage children, open water swimming, and writing. Her most recent titles, written with Sarah Hines Stephens, include A Dog and His Girl Mysteries and the Candy Apple titles The Sister Switch and Snowfall Surprise. Without Annette was Jane's YA debut.

Sarah Hines Stephens lives in Oakland, California, where she spends her time keeping up with her children and writing books with Jane B. Mason, including A Dog and His Girl Mysteries and the Candy Apple titles The Sister Switch and Snowfall Surprise.

Praise for :
* "Jane shines at atmospheric descriptions of the opulence of the ship and the people themselves while also managing to bring her powers of keen observation to the third-class passengers, many of whom were immigrant families full of hope . . . A compelling novel that stands both on its own merit and as an addition to the wealth of Titanic literature." -- Kirkus Reviews, starred review
"Jane pulls off the unusual feat of being both suspenseful and informative, gracefully incorporating technical details about the boat into high-drama scenes." -- New York Times Book Review