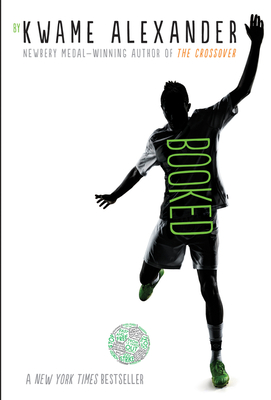 Using a variety of poetry styles, Booked follows Nick's journey through 8th grade - a difficult year complete with social and family issues, an obsession with soccer, a best friend and former teammate, Coby, and a sweet girl named April. It's all so rich and original. Oh! And the rapping middle school librarian and all those fun words? Just fabulous! — Gail Cosgriff

Twelve-year-old Nick learns the power of words as he wrestles with problems at home, stands up to a bully, and tries to impress the girl of his dreams. Helping him along are his best friend and sometimes teammate Coby, and The Mac, a rapping librarian who gives Nick inspiring books to read.

This electric and heartfelt novel-in-verse bends and breaks as it captures all the thrills and setbacks, action and emotion of a World Cup match.

"A novel about a soccer-obsessed tween boy written entirely in verse? In a word, yes. Kwame Alexander has the magic to pull off this unlikely feat, both as a poet and as a storyteller. " —The Chicago Tribune

Can’t nobody stop you

Can’t nobody cop you…

Kwame Alexander is a poet, educator, and the New York Times best-selling author of more than thirty-five books, including Rebound, the follow-up to his Newbery medal–winning middle grade novel, The Crossover. Some of his other works include Booked, which was longlisted for the National Book Award, The Playbook: 52 Rules to Help You Aim, Shoot, and Score in this Game of Life, Swing, and the picture books Out of Wonder and The Undefeated, which was longlisted for the National Book Award and won the Caldecott Medal, a Newbery Honor, and the Coretta Scott King Illustrator Award.

He is a regular contributor to NPR's Morning Edition, currently serving as their poet ambassador.

National Book Award longlist  2017 ILA-CBC Children's Choice List Book Links’ Lasting Connections 2016  Kirkus Best of 2016  Nerdy Book Club Nerdies 2016 Poetry/Novels in Verse  New York Times Bestseller  San Francisco Chronicle Best of 2016  Washington Post Best of 2016  BookPage Best of 2016   "A novel about a soccer-obsessed tween boy written entirely in verse? In a word, yes.Kwame Alexander has the magic to pull off this unlikely feat, both as a poet and as a storyteller. " —The Chicago Tribune   "This lively, touching middle school soccer story is full of fun." —Common Sense Media   * "A satisfying, winning read." —Kirkus, STARRED review   * "Alexander skillfully juggles verse styles to realistically capture Nick's humor and smarts, passion for soccer, and vulnerability when being bullied, having surgery, or facing his parents' troubled marriage. Emotionally resonant and with a pace like a player on a breakaway..." — Publishers Weekly, STARRED review   * "Alexander understands reluctant readers deeply, and here hands them a protagonist who is himself a smart, reading-averse kid who just wants to enjoy the words that interest him on his own terms. With accessible poetic forms and engaging formatting, Booked ’s pages will be turned swiftly and enthusiastically." — Horn BookMagazine, STARRED review   * "Middle-school readers and their advocates will surely love Alexander’s joyous word play and celebration of reading." — Booklist, STARRED review   "Newbery-winning poet Alexander once again brings to life a novel in verse that equally captures the rapid-fire excitement of a soccer match and the palpable pain of a young boy whose family is falling apart. Another winning goal for Alexander and middle school readers alike." —School Library Journal   "This is a fantastic book with a never-ending supply of new words like “onomatophobia” and “yobbery” that will leave readers full of new words and ideas. This is an absolute must-have for any library serving tweens." — VOYA   "A powerful story that will leave the reader breathless, right to the very end." —BookPage Children's Top Pick —